Delta-Northwest merger said to be close

According to published reports, the two airlines may finally be set to announce long-rumored deal. Merger would create world's largest airline. 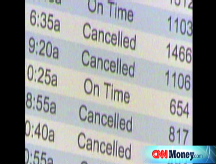 NEW YORK (CNNMoney.com) -- Delta Air Lines and Northwest Airlines are close to announcing a merger agreement, according to reports in the Wall Street Journal and Financial Times Sunday.

A deal would create the world's largest carrier and possibly prompt a series of other mergers that could reshape the U.S. airline industry.

The Financial Times reported that a deal could be announced as early as Monday while the Wall Street Journal said a merger announcement could take place Tuesday. Both papers cited unnamed sources familiar with the deal talks.

"I am not able to confirm any discussions that may or may not be happening," Delta spokesman Andy McDill told CNN Sunday.

A spokesperson for Northwest had no comment and spokespeople for the two companies' pilot unions were not immediately available for comment.

The FT reported that Atlanta-based Delta (DAL, Fortune 500) will pay about $3 billion for Northwest (NWA, Fortune 500), which is based in a suburb of Minneapolis. The deal has been rumored since late last year amid widespread talk in the airline industry that a round of airline mergers were needed to deal with rising fuel costs and a tougher outlook for earnings.

Some have suggested that several deals could eventually leave three mega-carriers handling about 80% of the nation's air traffic between them.

But a Delta-Northwest deal, even if agreed to by both managements, is not certain to take place.

United Airlines parent UAL Corp. (UAUA, Fortune 500) failed in its attempt to complete its purchase of US Airways that was announced in 2000. Concerns about the impact on passengers and airfares is likely to bring intense scrutiny of this deal from both Congress and antitrust regulators here and in Europe.

Delta and Northwest also could run into trouble with the pilot unions for both companies even though the airlines do not necessarily need the approval of these unions for a deal to go through.

Delta and Northwest both filed for bankruptcy court protection at almost the same moment in September 2005, and used that process to significantly reduce their capacity and labor costs.

Delta had to fend off a hostile takeover attempt by US Airways (LCC, Fortune 500) in late 2006 and early 2007, just before it emerged from bankruptcy in April 2007. But since that battle, its management has said it was open to the right combination.

Delta posted 5% growth in the number of miles flown by paying passengers last year, which is better than the industry average. In fact, it is the No. 3 carrier by that measure, behind only United and AMR Corp.'s (AMR, Fortune 500) American Airlines.

Still, after making money in its first six months out of bankruptcy, it returned to a loss of $70 million in the fourth quarter in the face of high fuel prices, and it has said it expects to lose money in the current quarter as well.

Northwest, which emerged from bankruptcy in May 2007, is the nation's No. 5 carrier. It had flat traffic last year and essentially broke even in the fourth quarter, posting an $8 million net loss after two quarters of profit. It is forecast to see a bigger loss in the first quarter though.

Northwest was the No. 4 airline in the country when it entered bankruptcy, but it has shaved capacity enough to fall to No. 5, just barely ahead of Southwest Airlines (LUV, Fortune 500), the carrier that has helped reshape the industry by devising a lower-cost business model than the traditional hub-and-spoke system used by more established carriers.

A deal announcement could open the way for No. 4 Continental Airlines (CAL, Fortune 500) to hold its own merger discussions. Northwest has held a so-called "golden share" of Continental, which allows it to block a deal for its codeshare partner. But it loses that veto by entering its own combination. There are rumors that United and Continental are eyeing their own combination.

Also this past week, American was forced to cancel thousands of flights due to safety inspections of its MD-80 jets.

- CNN contributed to this report.