The innovative 787 is the fastest-selling new airliner in history, but slow off the assembly line. As customers await the first delivery, Fortune got an inside look at how it's made. 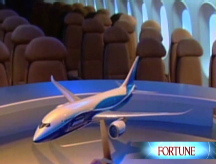 (Fortune Magazine) -- The Dreamliner is a plane that many people never expected to be built, especially by Boeing. A sizable camp believed that Boeing, the outfit that ushered in the Jet Age, no longer had the right stuff to build an entirely new airliner.

Happy to profitably stretch and tweak versions of its family of such planes as the 737 and 747, Boeing (BA, Fortune 500) had seen its day of defining the direction of commercial aviation. Since 1994, when the last all-new Boeing model, the 777, took to the sky, Boeing's chief rival, Airbus, was calling the shots in aerospace innovation.

The Dreamliner, also known as the 787, is Boeing's gambit to take back its title, not only as the leader in overall sales of commercial jets, but also as visionary for an industry. With its carbon-fiber skin, the Dreamliner is the first commercial jet that has more in common with a B-2 stealth bomber than the riveted aluminum tube in which passengers currently fly. Lighter, quieter, and more comfortable, the 787 is designed to fly farther on less fuel than any existing airliner. It is the future.

That is, as soon as it's delivered. Since it was made available for sale in 2003, Boeing has sold 892 Dreamliners to 57 customers around the world. At a list price of $162 million, that's worth about $145 billion. Yet not a single Dreamliner has flown, and the 787 is more than a year behind schedule.

Boeing's job is to manage this far-flung supply chain and to make sure the parts fit together flawlessly on the factory floor in Everett, Wash. That, too, is the future, but only if Boeing can figure out how to do it right. Most of the delay on the 787 can be traced back to a handful of suppliers that were not able to ramp up production fast enough on parts ranging from small metal fasteners to whole sections of the aft fuselage.

With customers growing impatient, Boeing's reputation is on the line. Says Pat Shanahan, the 787 project director: "How well we do on this will define the fundamentals for manufacturing commercial planes in the future. That's the big bet." For this exclusive photo essay, Fortune was given unprecedented access to the Dreamliner's manufacturing process around the world, from initial twists of carbon fiber to finished wings. In that journey from factory to factory, a clear message emerged. While the engineers and the assemblers are keenly aware of the disappointment and consequences of the delays, there is an unshakable belief that the 787 will fly soon - and some day will be acknowledged as the plane that charted the next age of commercial aviation.