The credit crunch may be behind us and earnings have been better than expected. That could lead to happier times if the Fed starts focusing on inflation. 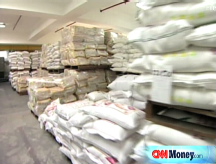 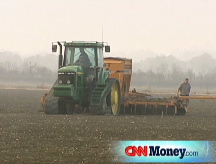 Oil hit another record high but has since pulled back. The dollar has finally started to show some signs of life. And for the most part, corporate earnings were - as Larry David would say - pretty pretty good.

Boeing (BA, Fortune 500) blew away earnings estimates. Ford (F, Fortune 500) posted a surprise profit. And even though investors Friday appear to be disappointed by the forecast from Microsoft (MSFT, Fortune 500) for the current quarter, the company issued a healthy outlook for its next fiscal year.

The worst of the credit crunch may finally be behind us. There have been no more major bombshells from financial institutions, a sign that the Fed's six rate cuts since last September and massive injections of liquidity into the banking system may be working.

TalkBack: Are you feeling more confident about the markets and economy?

In fact, Merrill Lynch (MER, Fortune 500) indicated yesterday that it would pay its dividend this quarter, relieving investors who were anticipating a cut.

For the first time in a while, there seems to be cause for optimism about the markets. The Dow is trading at its highest level since Jan. 10.

The bond market is acting as if it's not as worried about a recession anymore either.

Bonds have fallen in recent weeks, sending the yield on the benchmark 10-year U.S. Treasury to about 3.86%, up from a year-to-date low of 3.28% in January. Bond prices and yields move in opposite directions and lower yields are usually associated as a sign of economic weakness.

And for consumers, even though it's still a painful time because of rising food and gas prices, help is on the way as well. The first of the government's tax rebate checks will be hitting mailboxes on Monday.

Of course, it still is a rough economic environment. The surging price of food threatens to disrupt not just U.S. consumer spending patterns but the overall global economy.

Will Ben save the day?

That's where the Federal Reserve will hopefully step in. The Fed's policy-setting committee holds a two-day meeting next week and will announce its next step regarding interest rates on Wednesday.

As my Fortune colleague Colin Barr pointed out earlier this week, the Fed has a great chance to show the markets that it is serious about keeping inflation in check by holding its key federal funds rate steady.

Many fear that more rate cuts could lead to a further weakening of the dollar, which in turn, could fuel more speculation in the commodities markets and drive food and gas prices even higher.

"The Fed's intention to pause...may be part of an international effort to stabilize the falling value of the dollar in light of the deteriorating state of world food prices. Indeed, the falling value of the dollar has been an integral component of soaring commodity prices," wrote Ashraf Laidi, chief currency strategist with CMC Markets U.S. in a report Friday morning.

I doubt the Fed will be so bold to pause just yet though. Fed chairman Ben Bernanke, like his predecessor Alan Greenspan, likes to telegraph the central bank's moves well in advance and not surprise the markets. And according to the latest federal funds futures price on the Chicago Board of Trade, investors are pricing in an 80% chance of a quarter-point cut.

So my money is on that scenario playing out, which would put the federal funds rate at 2%. The Fed is also likely to carefully word its statement to reflect concerns about rising commodity prices. Expect the Fed to say something along the lines of "further policy action will be data dependent."

In other words, if the credit crisis isn't over and the housing market plunges even further into an abyss in the coming months, the central bank could lower rates again. But if the dollar stays weak and food and oil prices keep surging, the Fed might actually start raising rates later in the year.

So as strange as this may sound, higher interest rates, or at the very least, not more cuts, might be exactly what this market and economy needs. Hopefully, the Fed will send a strong signal to investors Wednesday that it is getting ready to sit tight.

Under the government's economic stimulus plan, 130 million people will receive tax rebate checks for $300 and up, starting April 28. What do you plan to do with your check? How do you think the stimulus plan will affect the economy? Send us your photos and videos, or email us and tell us what you think.

Stimulus money is on the way

Don't get steamed over rice limits