Rising pump prices mean a big chunk of your check could end up stimulating an economy far from America's. 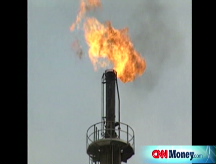 NEW YORK (CNNMoney.com) -- When President Bush announced that the government would begin distributing economic stimulus checks on Monday, he did so in the shadow of ever-rising gas prices.

The point is to boost the flagging U.S. economy. But record gasoline prices mean that up to a third of stimulus payments could be spent buying gasoline, most of which is imported from abroad.

"The rebate goes into the tank, and then finds its way into economies far from our own," said Jared Bernstein, a senior economist at the Economic Policy Institute, a liberal think tank.

In a move to avoid a recession, the federal government is sending $110 billion in checks to 130 million tax filers.

Middle-income individuals with no dependents should get about $600. A middle-income family of four will get about $1,670, according to the Treasury Department.

Gas prices are projected to jump an average of 40 cents a gallon this year, according to the U.S. Energy Information Administration. In 2007, the average driver consumed 578 gallons of gas per vehicle, the Federal Highway Administration said.

So if gasoline consumption holds steady, it could cost $231 more to fuel a car in 2008.

For a middle-income single person, that represents more than a third of their rebate money.

For the average American family with two cars, that's $462 of additional spending on gas - over a quarter of their rebate.

If EIA's projections are wrong, actual spending on gas could be much higher. The agency low-balled its 2007 estimates by 30 cents a gallon.

"Energy prices may eventually swamp most or all of the stimulus package," said Robert Brusca, chief economist at Fact and Opinion Economics, a Manhattan consultancy.

The stimulus package is designed to immediately boost consumer spending - which accounts for over two thirds of the country's economy - until longer term fixes like lower interest rates have time to kick in.

If consumers instead spend the money on imported items such as gas - two thirds of the nation's oil is imported, mostly from Canada, Saudi Arabia and Mexico - then the shot-in-the-arm for the U.S. economy is muted.

"There are various ways to spend your rebate dollars," said Bernstein. 'If you spend them the wrong way, they end up stimulating someone else's economy."

He said things like haircuts, domestic vacations, and going out to eat would be more helpful in warding off a recession than buying imported items - be it gasoline or a pair of jeans.

-A version of this story was published on March 14.