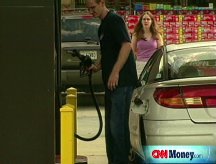 The shift wasn't a total surprise as gasoline prices have been rising - nearly every day - to new record highs.

Sales of light trucks, which include SUVs and pickup trucks, dropped 27% while car sales dropped only 0.2%. The company saw sales increases of its mid-sized sedans such as the Chevrolet Malibu, and its crossover SUVs, which are more fuel efficient than their full-size cousins.

The company also said that it has been able to keep accumulated inventory down to its lowest levels since September 2005.

However, car sales were not enough to make up for lower demand for trucks and the factory shutdowns resulting from the strike against parts supplier American Axle (AXL). GM said the strike reduced production by about 130,000 vehicles.

Ford: Ford Motor Co. reported a 12% drop in total auto sales in April as consumers moved away from trucks and SUVs to smaller and more fuel-efficient vehicles such as the Ford Focus.

The automaker said overall sales fell to 200,727 last month, below the 206,000 forecast by sales tracker Edmunds.com.

One bright spot for Ford (F, Fortune 500) was its small and fuel efficient Focus, sales of which rose rise 44% in April, driven by an 88% jump in sales to individuals.

"The overall decrease in April sales, particularly of pickup trucks, demonstrates that the auto industry continues to be under pressure from the national economy," company President Jim Press said in a statement.

The company said sales of its more fuel-efficient compact SUVs, such as the Jeep Patriot, rose significantly. Sales of the popular Dodge Charger sedan also rose.

However, overall truck sales fell 25% and car sales fell 19% during the month.

According to Mark Scott, spokesman for online automobile marketplace Autotrader.com, customer interest in gas-guzzling trucks and SUVs has declined in favor of coupes and hatchbacks.

After gasoline prices spiked in late 2007, the site saw the same sort of shift. However, customers began shopping again for heavier vehicles about six months after gas prices stabilized.

Will the same thing happen this time once gas prices stop climbing, "or is this really the breaking point?" Scott asked.

With historically less emphasis on SUVs, Japanese automakers have fared better than their American counterparts; the shift in buying behavior is still apparent.

During the past several weeks, the price of crude oil has been on a tear, surging above $100 a barrel.

Sales of Toyota's fuel-efficient hybrid Prius rose 67%, and sales of the hybrid version of its Camry automobile also rose significantly. Toyota said it sold a total of 32,841 hybrid vehicles in April. Meanwhile, sales of the company's sport-utility vehicles fell 8%.

Honda: Honda Motor Co. (HMC) delayed its monthly sales report Thursday, citing technical difficulties. However, the company's preliminary sales estimates showed a sales growth of about 6%, driven by high numbers for its fuel-efficient models such as the Fit and the Civic Hybrid.

The company also anticipates a 15% decline in sales at its Acura luxury brand.

Nissan: Sales of Nissan (NSANY) vehicles rose 7% to 75,855 in April, less than the 88,000 anticipated by Edmunds.com. When this April's two extra sales days are factored in, Nissan sold vehicles at a lower per-day rate than in April 2007.