Immigrants and jobs: A closer look

Foreign-born unskilled workers are less likely to be out of work than their U.S.-born counterparts, but educated Americans have an edge on foreign-born. 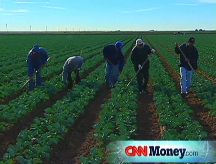 NEW YORK (CNNMoney.com) -- As the U.S. economy sheds jobs, concern is growing over competition between native-born and foreign-born workers.

That will come into clear focus this week. Thursday has been declared "Immigration Day" by groups seeking reforms of laws to allow a path for citizenship for many illegal immigrants. And on Friday the government is expected to announce more woes for the labor market.

Economists surveyed by Briefing.com forecast that the report will show employers shaved 75,000 jobs from U.S. payrolls in April. If they're right, it would be the fourth-straight monthly decline. The economy lost a total of 232,000 jobs in the first quarter.

The unemployment rate is also forecast to climb to 5.2% from 5.1%, which would mark a three-year high.

The Labor Department's monthly report does not distinguish between immigrant and native-born workers. But its latest annual reading on the issue shows that while the unemployment rate rose for foreign-born workers in 2007 - to 4.3% from 4.0% in 2006 - it was still lower than for native-born workers (4.7% in each year).

Perhaps the biggest one: Immigrant workers are willing to work for lower wages in low-skill jobs.

"It's pretty clear that low-skill [workers] are hurt by the availability of immigrant labor," said Daniel Hamermesh, an economics professor at the University of Texas.

On the other hand, Hamermesh said most educated Americans see limited competition for jobs from immigrants. "For most high-skill workers, there's little if any impact," he said.

For U.S.-born workers aged 25 and older with a high school degree or less, the unemployment rate was 5.2% last year, while the rate for foreign-born workers with the same characteristics is only 4.6%. Among educated workers, however, the unemployment pattern was reversed: 1.9% for the native born and 2.5% for immigrants.

"If you come from the country with a standard of living that's a lot lower, it looks like a great opportunity," said Brusca.

Brusca said the higher unemployment rate for college-educated immigrants may be due to their inability to get the work visa they need to get a job.

"Employers with unskilled positions may be willing to accept a made-up social security number or let someone work off the books," said Brusca. "The more you move up the food chain, the more likely you're going to be asked for a green card."

Staying on the job

Another reason the unemployment rate for unskilled immigrants is lower is because they may be more willing to move to find a job. And in just about any market, there is a greater availability of minimum wage jobs, said Brusca.

"If you're a minimum wage immigrant, you're going to find another job unless you've done something egregious to get fired," he said.

In addition, the lower unemployment rate for immigrants is driven by the fact that American workers can receive unemployment benefits and other government assistance when they lose their jobs. Illegal immigrants are not eligible for such help.

"The immigrants have no choice but to work," said Abraham Mosisa, an economist with the Bureau of Labor Statistics. "That's the big difference. If you are native born, you can get welfare, unemployment."