The IRS has always audited more small companies than big ones, but the gap is widening significantly - a policy that costs both the agency and its targets. 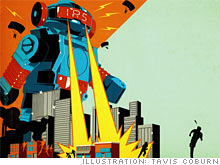 (Fortune Small Business) -- The day the IRS notified him that his business had been selected for a random audit, John Brimelow, owner of Atlanta PR and video-production company Atamira Communications, recalls thinking that "it's like you've won a very scary lottery."

At first the audit wasn't very painful: After a tour through the office and a look at Atamira's books, Brimelow says, the agent told him he couldn't find any reason for the investigation. But it went on. And on. Bills were questioned; deductions were allowed and then disqualified. More than 18 months later, the issue seems almost resolved - with Brimelow being exonerated. However, it won't end without cost: Brimelow, 49, estimates that he has spent $50,000 on the process.

"We've done nothing but follow the letter of the law," he says. "We've kept people gainfully employed and contributed to the community, the state, and our nation's productivity. This is the taxpayer's Guantánamo."

Brimelow is far from alone. The IRS recently made an inexplicable decision to increase audits of small companies while easing up on large firms. In fact, the smallest companies saw the taxman 41% more often in 2007 than in 2005, and companies with $10 million to $50 million in assets were 29% more likely to be investigated, according to a new study from the Transactional Records Access Clearinghouse at Syracuse University.

Meanwhile, companies with more than $250 million in assets were almost 40% less likely to be audited than in previous years - even though an average audit hour of large firms earned the IRS about $7,500, the Syracuse study found, while a similar hour directed at smaller companies turned up $474.

"There are a variety of angles I looked at to see if there was an underlying reason for the IRS to do this," says Susan Long, co-director of the Syracuse center. "I came up empty of any rational explanation."

Colleen Kelley, president of the National Treasury Employees Union, says they have "had reports from IRS employees handling large-case audits that they are being pressured to increase productivity by limiting the scope of audits." Under such pressure, auditors go after smaller, more easily resolved cases.

"Large corporations, with their armies of tax attorneys and accountants, are able to drag out an audit for years at a time," explains Congressman Lloyd Doggett (D-Texas), who sits on the House Committee on Ways and Means, which oversees the IRS. "Consequently, auditors tend to focus on smaller businesses that lack such resources."

The IRS, whose spokesman declined to comment, has its defenders. Timothy McCormally, executive director at the Tax Executives Institute, notes that the audit rate for the largest companies might be lower because of pilot programs in which large-business taxpayers consult with the IRS year-round (a kind of "real-time audit") to eliminate questions later.

Still, it's a sad reality that the IRS is picking on the smallest of businesses when neither they - nor the country - can afford it. The Syracuse study found a 20% reduction in large-business tax underpayments caught by the IRS, from about $30 billion to some $24 billion, between 2005 and 2007. Just last month the Wall Street Journal reported that a Dutch bank is under investigation for allegedly helping big U.S. corporations save at least $1.46 billion in U.S. taxes through complex shelters - a situation the IRS scrutinized only after a whistleblower came forward.

That's a poor approach for a collection service charged with closing the $290 billion gap between the amount of taxes owed and the amount paid.

"A net that lets the biggest fish escape but traps the minnows is no way to fish - or to collect taxes," says Doggett.

For Brimelow, gallows humor has been the only refuge.

"The audit has gone on so long that it's just part of the day-to-day fabric of life," he says. "I think I'm suffering from Stockholm syndrome, and I will miss the agent when it's all over."

Have you ever been the victim of an audit? Share your story in our forum.

Scrimping on your salary? Beware an audit

Snipes' jail time: A tax-protest 'wake-up call'
To write a note to the editor about this article, click here.