The case for nukes

A solution to the energy crisis has been under our nose for decades.

Power Trip
See the stops along the author's route, as he toured America's nuclear plants.
Go to map
NRG: Nuclear is the way to go 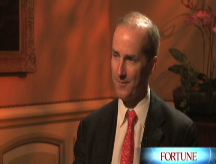 (Fortune Magazine) -- When Goldman Sachs analysts suggested last week that oil could hit $200 a barrel, I expected someone somewhere to express horror at the possibility. But the reaction was a tiny, resignation-filled sigh. Relentless fuel-price increases have so exhausted consumers that we don't have the energy to be outraged anymore. So we feel helpless as we watch oil sprint past the $130 mark on its way to price-prohibitive territory and wonder whether it's too late to bring back the horse and buggy. Our sense of helplessness is an illusion: There are things we can do. We got ourselves into this mess, mostly through multiple administrations of politically comfortable but shortsighted decision-making. And inasmuch as we're willing to stand a little political discomfort, we can get ourselves out.

One uncomfortable way to mitigate the energy crisis has been under our nose since the 1950s: nuclear energy. It's one of the cleanest and most efficient alternatives to coal- and natural-gas-based electricity production, and it's responsible for less than 20% of domestic electricity production. The most recent numbers (2006) indicate that coal-based production was the largest contributor, at 48%. Increasingly expensive petroleum and natural gas account for 22%. All three are replaceable.

It may not be fashionable to suggest that the French know what they're doing with regard to anything but wine and cheese, but spend some time in Provence and note the remarkably clean air and cheap electricity, 75% of which is produced by nuclear power plants. Most of the plants were built after the 1970s oil shocks that sent France's economy into a tailspin because it was almost completely dependent on foreign oil, as we are now. Nuclear energy doesn't produce the air pollution that burning coal does, and even waste products are recyclable, though it hasn't been done thanks to an also potentially shortsighted Carter-era decision to ban it over fears of nuclear terrorism.

Although the ban has been reversed, the fears still linger. But irrational fear of improbable safety breaches is responsible for most opposition to nuclear power in this country. The unlikely culprit? Pop culture. We've seen "The China Syndrome," and we worry that nuclear-reactor employees may be bumbling Homer Simpsons, capable of accidentally pushing the red button. Chernobyl and Three Mile Island - the former of which killed 36 people and the latter of which killed none - have become so outsized in the American imagination that our perception of actual risk has been completely distorted. We're willing to tolerate the health risks and environmental repercussions of other fuels to avoid the infinitesimally small and comically improbable possibility of a catastrophic accident that resembles something out of a 1979 Jane Fonda movie, the likes of which have never happened in the history of nuclear power.

We also cognitively associate nuclear power with bombmaking and having seen what atomic radiation can do to people; we think of it as being exponentially worse than exposure to fire, poisonous gases, and pollution - the likely repercussions of large-scale accidents at conventional power plants. As with anything that's exotic, potentially dangerous, and little understood, it becomes more frightening in mythology. Silhouettes of cooling towers on the horizon seem sinister because we've seen the imagery from Chernobyl - an accident that was exacerbated because it was left burning for five days, which would never happen now.

Are there downsides? Yes. Nuclear waste has to be stored somewhere, and consistent with human behavior since the beginning of time, no one wants it in his own backyard. But at some point we have to weigh the necessity of energy independence against the cost of uncomfortable fixes like nuclear energy. As oil climbs to the point where no one can afford it and we're forced to stop buying it- what Goldman analysts euphemistically call "demand destruction," as if it were intentional- we may find that we have no choice. We can't afford to be afraid anymore.

More coverage on the nuclear industry.