Cost-cutting pays off for Dell 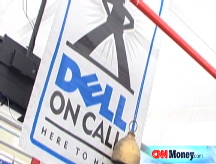 Fortune -- A slowdown in consumer spending and an ongoing slump in corporate demand didn't hold Dell back in its just-completed first quarter.

The Round Rock, Texas-based PC maker beat Wall Street's expectations for the quarter ended earlier this month, saying cost-cutting gains boosted the company's closely watched operating profit margin. Dell made $784 million, or 38 cents a share, up from the year-ago $756 million, or 34 cents a share. Revenue rose 9% from a year ago to $16.08 billion. Analysts surveyed by Thomson Financial were looking for a 34-cent profit on sales of $15.7 billion.

Dell said Thursday it eliminated about 3,700 jobs in the past quarter. Analysts were expecting 2,200 job eliminations out of the company's 82,700-strong workforce.

Cost cuts may be the only lever working to Dell's (DELL, Fortune 500) advantage these days as the PC price war continues against rivals like Hewlett-Packard (HPQ, Fortune 500), Toshiba and Lenovo. The pressure is made worse by Apple's (AAPL, Fortune 500) expanding presence in the market, particularly in the fast-growth notebook segment.

But cutting its way to favorable financial results doesn't solve the bigger challenges Dell faces. As a recent survey by RBC of corporate IT buyers suggests, the demand for new PCs and servers, Dell's core business, shows no sign of returning this year. And now consumers are starting to feel the pinch of a slowing economy and moving toward lower-priced PCs, as Dell's fourth quarter results showed.

Dell's progress in fighting those trends are evident in its operating margin, a gauge of how well the company is balancing expenses with falling PC prices. Most analysts were looking for operating margins in the 5.1% to 5.4% range. But the number came in at 5.6%, showing Dell isn't getting beaten up by lower prices.

In an interview before the earnings announcement with Wall Street Journal's All Things Digital team, CEO Michael Dell said the company would continue to grow and take market share. But he also said he was seeing spending caution and added that the company would stop opening new Dell stores, altering the company's plan to compete head-to-head with the popular Apple stores. Instead, Dell says the company will pursue its partnerships with big box retailers.

Dell got a piece of bad news Tuesday when a New York Supreme Court judge ruled that the company defrauded and misled its customers over technical service promises and interest-free credit offers. Dell had not decided whether to appeal the case and now awaits a decision from the court on what sort of penalties are involved.

Dell lost its top spot in the PC market last year when rival HP surged ahead on the popularity of its notebook computers. The defeat led to a management shakeup at Dell with founder Michael Dell returning to turn the ship around.

Some analysts believe that Dell could return to its low-cost steady growth glory. "We expect the company to return to gaining market share in the PC market," Wachovia analyst David Wong wrote in a recent report, adding "perhaps at some point in 2008."