Bombardier and others are racing to find ways to patch together Europe's disparate rail systems. 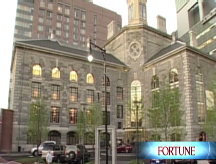 NEW YORK (Fortune) -- It is an unusual sight to behold: Freight trains zipping through Europe, across country borders - and over myriad rail voltages and national train systems. The technology patching together these previously incompatible train lines: A new "one-size-fits-all" locomotive that is winning over freight operators across Europe.

The all-in-one train is the brainchild of engineers at Bombardier, the Canadian train and airplane maker. In 1997, customer Railion, a German transport company, said they wanted to buy 400 new trains. The catch? The engines had to traverse from the former East Europe to Germany and back.

Bombardier's team was stumped. Europe is a mishmash of disparate rail systems that predate the European Union, back when governments banked on the incongruity "to protect themselves from invading armies and competition from foreign industries," says Oliver Sellnick, director at the International Union of Railways in Paris. While the European Union has managed to unify most of the continent on everything from a common currency to farm policy, combining railroads hasn't been easy.

Traveling by train from one country to another has long required coordination with multiple national railways. Drivers and locomotives, for instance, are changed at the borders for technical and legal reasons. For travelers, the challenges haven't been as readily apparent as passenger trains have long been given top priority when crossing borders (and high-speed trains, like France's TGV and Spain's AVE, promise to eliminate the few hassles). But the logistics of transporting goods by rail has long been a nightmare.

"If one train was going from, say, Lyon to Warsaw, it could spend 24 or even 48 hours on the borders," says Timothy Jackson, international director of Angel Trains, a British company that leases trains to freight companies. To avoid the hassle, most freight operators use trucks instead.

But now the baby-steps of liberalization are coming to Europe's rails. So when a Swiss company followed Railion's lead in 1998 and asked for a locomotive that could run from Switzerland to Germany, Bombardier saw the future.

Engineers at Bombardier's facilities all over Europe set out to invent a new train that could traverse Europe's patchwork of voltage levels, signal systems and other local quirks - while keeping this feature-rich locomotive affordable.

Company engineers were inspired by Legos, the interlocking toy bricks, says Janis Vitins, a German-based director of product planning at Bombardier. They created a locomotive, called "Traxx," that uses interchangeable "bricks" - boxes that contain the power conversion units needed to run a train. The rail operators can configure their engines to operate in any country the train enters. One combination of bricks makes the locomotive fit for running from Holland to Italy; another makes it run from France to Germany - and so forth.

On top of this, Bombardier developed software that deciphers all the different commands to a common signal-system and serves easy-to-read instructions to a single screen in the cockpit. This way, drivers won't have to memorize more than 20 different stop-signals.

Today, approximately 700 Traxx engines are swooshing through Europe, with another 500 on order. Traxx engines cost more than standard locomotives, but Vitins says rail operators increasingly are willing to pay a premium to be able to cross borders quickly and efficiently. Even so, the company is standardizing its locomotives to keep costs down: starting last year, Bombardier's diesel and electric Traxx trains look similar.

Bombardier and its chief competitor Siemens (SI), the German engineering giant, see a huge opportunity. In the United States, half of all freight is shipped by rail. In Europe, only 10% is carted by train. Meanwhile, European highways are clogged, and truckers now pay fees to help offset pollution.

"This is a whole new market opening up," says Bombardier's Vitins, who is also eyeing potential markets in the former Soviet Union and in Asia, where railroads are almost as balkanized. On Wednesday, Bombardier reported a nearly threefold jump in profits on a 21% increase in revenues for the first quarter ended April 30.

For their part, freight operators welcome the sudden burst of innovation in a business that didn't see much change for a century or so. "If we want to stay competitive now, we need flexible locomotives," says Olle Wennerstein, a vice president of Swedish freight company Green Cargo and a new Bombardier customer.

How Brazil outfarmed the American farmer