The typically Republican-friendly securities industry is having a change of heart, backing Obama in the belief that the Democrat could take the White House. 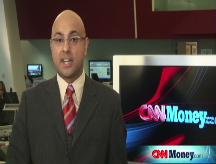 Issue #1: America's Money - Everyday on CNN
The candidates on the economy 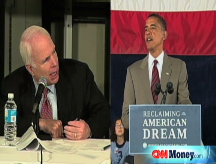 NEW YORK (CNNMoney.com) -- The fact that Barack Obama is now the presumptive Democratic nominee for president seems to sit well with Wall Street. After all, the securities industry has been funding his campaign for months.

However, the upbeat sentiment is more for the party he represents and its chances of taking the White House than his proposed policies.

It's true that the Republican-friendly securities industry has been sending the most contributions to Obama's campaign above all other contenders for months. But Wall Street is largely reacting to a mood change and antagonism toward Bush. Whatever happens come January, investors want to make nice with the party in power.

The sentiment switch comes even as, from a policy standpoint, many Wall Streeters prefer what McCain has so far espoused. And that speaks volumes.

"I think investors are saying they think the Democrats are going to win and they want to be on the winning side," said Rutherford.

The securities industry has already contributed nearly $8 million to Obama's campaign versus just over $4 million to McCain, according to the Center for Responsive Politics. That reflects a new trend this election season. Should the pace hold up through November, it would be the first time this has happened in a presidential election since the early 1990s. (Full story).

Rutherford, a Republican, points out that the steady cash flow doesn't mean Wall Street is ready to break out the champagne just yet.

He says that Wall Street "should be scared of Obama," who has announced a number of proposed policies that Rutherford says are anti-business, including boosting the capital gains tax to somewhere over 20% from the current 15%.

However, Rutherford noted that McCain "has his warts too," including his support of a summer gas tax holiday, which Rutherford said would do little to lower prices.

Both candidates will have to deal with the same struggling economy, hard-hit consumers, ballooning deficit and questions about Social Security and health care. And a lot can change between now and November.

Taxes can't budge for now. Wall Street's biggest worry is higher taxes, a cause that 'hits investors where it hurts,' said Douglas Peta, market strategist at J. & W. Seligman. But not a lot can change until 2011, when the current Bush tax cuts are set to expire for everyone.

McCain has said he would keep the Bush tax cuts in place and cut the corporate debt rate, among other factors.

Obama wants to keep the Bush tax cuts in place for those not making more than $250,000 a year. He has also said that he wants to boost the capital gains tax. (For more details, click here).

Clearly, higher capital gains taxes would alarm Wall Street, said J. Stephen Lauck, CEO at Ashfield Capital Partners. But it's not clear that something like that could even make it through Congress, regardless of which party is in control.

"There are a lot of Democratic senators who would oppose it as well," he said.

"I don't think anyone wants to see tax increases," said Lauck, "I suspect that we'd see marginal increases under Obama and eventually moderate increases with McCain."

As for what the two candidates have proposed so far on the economy, experts are not especially impressed. (Full story).

Nothing set in stone. Those proposals stand a good chance of changing, though, as the candidates head into the general election.

Typically, candidates grasp onto issues during the primaries geared toward rallying their party in each specific state.

Some Wall Streeters got worried, for example, when Obama (and Hillary Clinton) vowed to revisit the North American Free Trade Agreement, or NAFTA, amid the battle for Ohio and Pennsylvania - manufacturing heavy states with constituents worried about jobs going overseas.

J. & W. Seligman's Peta said the comments were geared toward a specific group and may not be much of a factor in the fall. Once the primaries are over, candidates tend to focus on broader issues that appeal to a larger contstituency.

The super investors. Wall Street's rock star investors know who they're backing, and they've been fairly public about it.

"Never voted in a presidential race for a Democrat, so sure I'm on board with John McCain," billionaire oilman T. Boone Pickens told Fortune this week. Boone cited McCain's age, experience and his having been a war hero as among his attributes.

And although in the past Pickens has criticized McCain's support of suspending the gas tax, he told Fortune that he supported McCain's energy policy.

Last month billionaire investor Carl Icahn told an investors conference that Obama would be a terrible president whose election would cause higher interest rates and hurt the dollar, according to reports.

But some other billionaires like him, including Citadel Investment Group's Kenneth C. Griffin and Soros Fund Management's George Soros. And Berkshire Hathaway head honcho Warren Buffett has pledged his support as well. Stay tuned.