The politics of oil shale

Fortune talks to Sens. Orrin Hatch and Wayne Allard about the roadblocks to oil shale production. 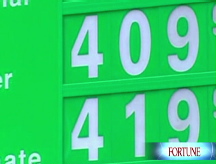 You'd think with gas prices topping $4 and consumers crying uncle, Congress would be moving fast to spur development of a domestic oil resource so vast - 800 billion barrels of recoverable oil shale in Colorado, Utah and Wyoming alone - it could eventually rival the oil fields of Saudi Arabia.

You'd think politicians would be tripping over themselves to arrange photo-ops with Harold Vinegar (whom I profiled in Fortune last November), the brilliant, Brooklyn-born chief scientist at Royal Dutch Shell whose research cracked the code on how to efficiently and cleanly convert oil shale - a rock-like fossil fuel known to geologists as kerogen - into light crude oil.

You'd think all of this, but you'd be wrong.

Last month, the U.S. Senate's Appropriations Committee voted 15-14 to kill a bill that would have ended a one-year moratorium on enacting rules for oil shale development on federal lands (which is where the best oil shale is located). Most maddening of all - at least to someone like myself not steeped in the wacky ways of Washington - the swing vote on the appropriations committee, U.S. Sen. Mary Landrieu, D-La., voted with the majority even though she actually opposes the moratorium.

"Sen. Salazar asked me to vote no. I did so at his request," Landrieu told The Rocky Mountain News. A Landrieu staffer contacted by Fortune doesn't dispute this, but notes that Landrieu did propose a compromise which Republicans rejected.

She was speaking of U.S. Sen. Ken Salazar, D-Colo., who has emerged as the Senate's leading oil shale opponent. Salazar inserted the aforementioned moratorium into an omnibus spending bill last December, and in May he proposed a new bill that would extend the moratorium another year.

Salazar's efforts have essentially pulled the rug out from under Shell (RDSA) and other oil companies which have invested many, many millions into oil shale research since the passage of the Energy Policy Act of 2005, which established the original framework for commercial leasing of oil shale lands. (Last year, oil shale represented Shell's single biggest R&D expenditure.)

Salazar says he's simply trying to slow things down in order to ensure environmental considerations don't get trampled in the rush to turn western Colorado into a new Prudhoe Bay. But, ironically, his bid to extend the moratorium comes at a time when his fellow Senate Democrats have been blasting Big Oil for not reinvesting enough of their profits into developing new sources of energy.

I recently spoke with Republican U.S. Sens. Orrin Hatch of Utah and Wayne Allard of Colorado, the two lawmakers working hardest to end the oil shale moratorium. Here are some excerpts from the interviews:

Fortune: Why do you consider developing oil shale such a high priority?

Sen. Hatch: We have as much oil in oil shale in Utah, Wyoming and Colorado as the rest of the world's oil combined. Liberals and environmentalists can talk all they want about wind, solar and geothermal - all of which I'm for - but last time I checked, planes, trains, trucks, ships and cars don't run on electricity. 98% of transportation fuel right now is oil. Ethanol is the only real alternative, and we're seeing that ethanol has major limitations.

It's pathetic. Environmentalists are very happy having us dependent on foreign oil. They're unhappy with us developing our own. What they forget to say is that shipping fuel all the way from the middle east has a big greenhouse gas footprint too.

Fortune: Any hope of changing Sen. Salazar's mind? After all, he says he's not opposed to oil shale production in principle.

Sen. Allard: His mind seems pretty set. His argument is, if we delay this, it gives us an opportunity to phase it in gradually. But he's got it turned around. We need the rules and regulations in place first. When the oil companies go to bid on their leases, they need have some idea what their royalties might be and what their remediation requirements might be [for restoring the land at spent drilling sites].

Fortune: Have you talked to Shell about this?

Sen. Allard: We have, and they've indicated a great deal of frustration. They've put it this way: Look, we can't continue to invest millions and millions of dollars in this kind of research without seeing some light at the end of the tunnel.

Sen. Hatch: Sen. Salazar and the Colorado governor [Democrat Bill Ritter] say they don't want it to happen too fast. Well, the existing law that I sponsored [which became part of the 2005 energy act] makes it abundantly clear that each governor gets to decide how quickly developments should move forward in their respective states. [Salazar and Ritter] know that. What they're really doing is making sure that the governor of Utah and the governor of Wyoming never gets to make that decision for themselves.

Fortune: One of Sen. Salazar's environmental concerns involves water and the big draw on local water supplies required for oil shale production. Based on my reporting in western Colorado last year, this seems like a legitimate concern. What's your take on this?

Sen. Hatch: Let's compare it to ethanol. Corn needs about 1,000 barrels of water for the energy equivalent of a barrel of oil. That's a crazy amount of water, but it's worked out alright so far because corn is grown in rainy areas, for the most part. But if you want to increase the amount of ethanol, you're going to have to go to irrigation, and then there will be major water limits on how much we can afford to grow.

On the other hand, the Department of Energy estimates that oil shale will require three barrels of water for every barrel of oil.

Fortune: Of course, water is a lot scarcer in western Colorado than it is in Iowa.

Sen Hatch: It is, but remember the oil companies are going to use and recycle the water. And while we're on the environmental impact, let's talk about land use and wildlife habitat. One acre of corn produces the equivalent of 5 to 7 barrels of oil. One acre of oil shale produces 100,000 to 1 million barrels.

Fortune: With gasoline at $4, why this isn't this more of a front-and-center issue for consumers and voters?

Sen. Hatch: I'm generally the last guy to lambaste the media, but generally you do not hear these facts. We're sending $600 billion annually to enemies of our country. If one acre of oil shale produces 1 million barrels of oil, that's 1 million barrels that we would not be importing from Russia and the Middle East. People are going to go berserk when they find out that all along we had the capacity, within our own borders, to alleviate our dependency in an environmentally friendly way.

Ironically, the local governments in Colorado's oil shale areas do support oil shale development, but it's being stopped by the ski-resort elites. A couple months ago, an article came out about how the city of Aspen was being besieged with building applications equating to about $2 million in development a day. Now if those nice, rich people in Aspen really cared about the environment, they might save an acre or two of those beautiful forests they're building on and support some oil-shale development in the not-so-nearby and not-so-beautiful oil shale areas of Colorado.

Fortune: Has oil shale development always been a partisan issue or is this something new?

Sen. Allard: It is something new. The issue with the Democrats now is they want to cut off any source of carbon. And there are those in the Senate who believe the more expensive you make gasoline, the less driving people do and you force conservation by making driving so expensive people can't afford it.

Hunting for oil beneath the ice
Related Articles