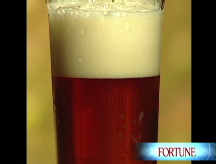 NEW YORK (CNNMoney.com) -- There's a taste for Budweiser even outside this country.

The $65-a-share bid comes two weeks after the Financial Times reported InBev, brewer of Beck's, Bass and Stella Artois, was weighing a possible offer, driven in part by the strength of the euro against the dollar and the presence of a pro-merger administration in Washington.

"[There is] little geographic overlap," said Feeney in a statement. "China is the only shared market with manufacturing assets, aside from one Anheuser-Busch facility in the U.K., which leads us to believe that InBev would focus its efforts on streamlining the U.S. beer giant, a possibility which might not sit well with Anheuser-Busch distributors."

Anheuser said its board "will evaluate the proposal carefully and in the context of all relevant factors, including Anheuser-Busch's long-term strategic plan." The company said it expects the board to make a decision "in due course," though top members of the Busch family that have run the company for generations have said they don't want to sell.

Feeney said that the deal is far from done, as the beer industry is highly regulated, and he believes InBev overvalued Anheuser-Busch's stock by about $15 a share.