As the auto giant grows sicker, its chances for a full recovery get dimmer. 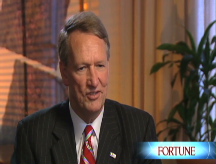 NEW YORK (Fortune) -- The news coming out of Detroit is getting worse, and unlike in past years, there will be no full recovery. Analysts are betting that General Motors will be forced to take emergency financial measures this year that could hamper its competitiveness for a long time to come.

Here's why the damage is likely to be permanent: The sales slump is digging a far deeper hole than seemed possible just a few months ago. June is shaping up as a full-fledged disaster. Expectations are that U.S. sales of cars and trucks will run at an annual rate of 12.5 million, as compared with 16.3 million last year and 15.2 million for the first quarter of 2008. If you are keeping score at home, those are practically Depression levels. Citibank analyst Itay Michaeli expects that June sales for GM (GM, Fortune 500) and Ford (F, Fortune 500) will be down 28% and 27% respectively. Since truck sales alone are likely to fall much further than that, the impact on profitability will be even greater.

There's a cascading effect that comes from such a punishing decline. With the trade-in value of trucks and SUVs plummeting, the companies are left with huge write-offs on vehicles returning from lease. Meanwhile, repeat customers are being kept out of the market because they don't have enough equity in their old trucks to buy new ones.

As investors have sold off GM stock, they have pushed its market capitalization below $8.5 billion. That's only $1 billion more than Cerberus invested in Chrysler last year. If you valued GM on the terms Chrysler got last year, it implies that investors are getting GM's very profitable Asian and Latin American business for free.

With investor Kirk Kerkorian now holding a stake in the company, Ford at least has a committed investor on its side, which is effectively putting a floor under the price of its stock. There is nobody filling that role at GM

This stunning sales decline means that GM is continuing to burn cash at a fearsome rate - perhaps $1 billion a month by some estimates. Rod Lache of Deutsche Bank figures that GM will consume as much as $19 billion in cash over the next two years. Since it began the second quarter with $23.9 billion on hand and needs $10 billion to $15 billion to keep the lights turned on, that leaves a big hole.

To fill it, GM could follow the Chrysler example and start selling off its non-earning assets like land, empty plants, and even underperforming brands like Hummer and Saab. Or it could follow the example of Ford and borrow against its unencumbered assets like trademarks and real estate. Anybody want to make a guess as to how large a mortgage GM could get on its headquarters in downtown Detroit?

Whatever GM does, it is likely to be expensive. Borrowing $10 billion at around 10% interest would cost it $1 billion a year. Analyst Himanshu Patel of JP Morgan lopped $1.20 per share off his estimate for 2010 earnings to account for the interest payments.

It is also likely to leave GM weaker for the long haul. In order to attract financing, analyst Lache figures that GM will need to develop a comprehensive restructuring plan that would include cutting more overhead and further consolidating its brands.

That will accelerate GM's shrinkage. In May, GM sold only 268,892 vehicles in the U.S., leaving it just a smidgen ahead of Toyota (TM), which sold 257,404. June could see Toyota beating GM out for the title of the number one auto company in the U.S.

In GM history, 1992 is generally considered the worst year of modern times, with multiple plant closings, huge losses and the shunting aside of CEO Robert Stempel. Now it looks like 2008 will have that beat.

As GM continues to slide downhill, there is going to be plenty of finger pointing to identify who is to blame. There is plenty to go around. Some comes from just plain bad decision-making, like the Fiat deal, the Delphi spinoff and the Saab acquisition. But a lot stems from the poor running of the day-to-day automotive business. Every time that gasoline prices have spiked, GM has gotten burned, and its Japanese competitors have out-maneuvered it at every turn: first into small cars, then to crossover vehicles, and now with hybrids and other fuel-saving technologies.

Business historians and plain old second guessers will have a field day.