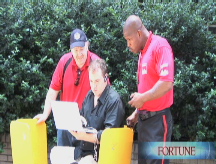 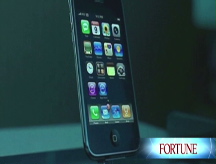 NEW YORK (Fortune) -- Ramon Reyes had a problem. He could only get sound from one channel on his iPod video player. At first, he thought his ear-buds were busted. But he replaced them with a pricey new pair made by Sony, and it didn't make any difference.

So on a recent sunny afternoon, Reyes stood outside his office in lower Manhattan, chewing gum, and waiting for a visit from Demetrios Leontaris, better known as the iPod Doctor. Leontaris spends his days cruising Manhattan and tending to the needs of distressed owners of Apple's ubiquitous portable music player.

Leontaris, a heavy-set guy from blue collar Union City, N.J., soon arrived in the black Pontiac Aztek that doubles as his office. He rolled down the window, eyeballed Reyes' iPod, and offered a diagnosis: The headphone input jack was broken. "It's fairly common with this model," the iPod Doctor said reassuringly.

Sitting in the driver's seat of the Aztek, Leontaris opened Reyes' iPod and replaced the damaged part with the swift, graceful movements of a concert pianist. "There you go," he said, returning the refurbished device to its owner.

Reyes put his buds in his ears and gave his iPod a listen. "Excellent," he said, smiling and nodding his head to a beat that only he could hear. The iPod Doctor collected his standard $70 fee for the repair and headed off for another appointment.

Leontaris, a 33-year-old father of three, runs one of at least half a dozen iPod repair services that have sprung up in recent years in New York City. He has plenty of work. Apple (AAPL, Fortune 500) has sold 150 million iPods since it introduced its digital music player in 2001.

Apple does some repairs under its warranty program - but not if the damage is the customer's fault. "If you are Apple," says Michael Gartenberg, vice president and research director for Jupiter Research, "your ideal scenario is to sell someone a new iPod, not repair an old one." Apple declined to comment for this story.

That's fine with Leontaris. He makes a living attending to broken iPods that Apple won't touch. And unlike those guys at the Genius Bar at your local Apple Store, the iPod Doctor makes house calls "Eighty percent of the repairs I can do on the spot," he boasts.

Leontaris gets the broken iPods that have fallen on the pavement. "People drop them all the time," the iPod Doctor shrugs. "Usually what happens is the screen cracks or the hard drive breaks." No big deal for him.

He gets the ones that fall in the water. Warns Leontaris: If you ever do this, don't plug your waterlogged iPod into an electric outlet. You'll fry the circuitry. "You just make worse," he says.

The iPod Doctor has even gotten calls from people whose portable MP3 players have suffered vehicular damage. "There was one guy who wanted me to fix his Nano after it had been run over by a car," he laughs. "The screen was cracked. It still worked, but at that point, it was just a 4-gig iPod shuffle. You couldn't see what song was playing."

Leontaris gets some spare parts - headphones input jacks, screens and batteries - from Chinese manufacturers. He extracts the rest out of used and broken iPods he buys from customers. He thinks he has about 50 of them lying around his house right now. "I've lost count," says Leontaris, who also fixes Creative Zens, Microsoft Zunes, RCA Lyras as well as iBooks, MacBooks, Laptops and PDAs.

Surprisingly, he is self-taught. His Greek-immigrant father was a superintendent in an apartment building overlooking the Hudson River in Union City. As a teenager, Leontaris hung out in his dad's shop and fixed broken computers, microwaves, VCRs and 8-track players that tenants threw in the trash. "I've been fixing electronic devices almost all my life," he says. "It's just something that comes easy to me."

He worked for a time as a floor captain supervising weddings and special events at the Jersey City Hyatt. He decided to become a full-time repairman after he and his wife had children, and he wanted to control his work schedule. Sometimes he brings his youngest along on his rounds. There's a kid's car seat in the Aztek and even a stray Power Ranger or two lying around.

It's 3 p.m.. Time for another visit. This time, Leontaris is in midtown Manhattan, meeting a guy from "The Daily Show with Jon Stewart" who fears his iPod is dying. "There were a couple of times when it froze," he laments. "I heard some clicks inside. I didn't want to mess with it."

Leontaris holds the iPod up to his ear and listens carefully. This is one job he won't be able to do on the spot. "It sounds like the hard-drive is going,"" the iPod Doctor says. "I'll have to take it."

"You think you'll be able to get the music off?" his customer asks.

"Yeah, sure," Leontaris responds as he covers the iPod with bubble wrap.

"Hey, you got another one of those [business] cards?" another "Daily Show" guy asks Leontaris.

It's hard enough to get a regular physician to come see you. But an iPod Doctor who makes house calls? You don't want to let him drive off without getting his number.

Selling big business on the iPhone