Howard Stern may have a Sirius dilemma

Financial problems at Sirius and XM mean the lavish deals with Stern and other top talent may be a thing of the past. 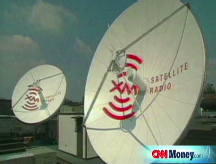 But the shock jock may be in for a shock of his own when his deal expires in 2010. Heavy spending by Sirius (SIRI) and XM Satellite Radio (XMSR), its chief rival and potential merger partner, on stars like Stern have come at a hefty price: While millions of radio enthusiasts have signed up in recent years, both Sirius and XM are deeply in debt, cash-strapped and suffering an ominous sales slowdown.

Once Sirius and XM merge, as early as this week, they'll need to take drastic steps to bolster their balance sheet, including cutting costs and refinancing XM's massive debt. It won't be easy, but the prospect of financial collapse will have its advantages - namely, negotiating power with stars like Stern. After all, Sirius-XM will be the only satellite radio game in town.

Sirius said Monday that it expects to squeeze about $400 million in costs out of the combined company next year, and reach positive free cash flow, excluding spending on satellites, in 2009.

The $500 million deal that Sirius struck with Stern in 2004 is a good example of the bidding war that eventually forced Sirius and XM in each other's arms.

Stern was already in talks to go to XM when Sirius swept in with its ridiculously large bid. Sirius - the smaller of the two satellite broadcasters with less than a million subscribers - saw Stern as the marquee name that would more than double its audience, and lure advertisers. XM, with 2 million subscribers, had reached the same conclusion, which is why Sirius had to pay big to land Stern.

Similar battles played about for other top draws. Sirius, for instance, is paying the National Football League $220 million for an exclusive seven-year deal and Nascar $107.5 million for a five-year contract. XM is shelling out $650 million for its exclusive 11-year Major League Baseball pact.

In all, total programming costs, the biggest single expense for the two companies, came to $475.4 million last year, or 23% of total revenue.

Combined, Sirius and XM will have close to 20 million customers. Only a fraction of those users are Stern fans, so it's likely that Sirius will seek a new contract with Stern that's more reflective of his overall contribution to the business, predicts Cowen analyst Tom Watts.

Sirius-XM will have to move fast to cut costs.

Satellite radio subscriber growth is flat, the likely victim of a slowing U.S. economy and waning interest in the once-novel medium. Meanwhile cash is running dry. Last month, citing heavy debt costs, a tightening credit market and sluggish car sales, Goldman Sachs analyst Mark Wienkes slashed his stock price targets for the two companies, raising the prospects that there may be a financial black hole ahead for the combined company.

If so, analysts expect Sirius-XM to take a hard look at programming costs, either by waiting until existing contracts expire or using the onset of a financial crisis to force everyone to the bargaining table sooner. The combined company's market dominance, analysts say, will give it the necessary leverage to cut programming costs by as much as 30%.

One obvious target: Howard Stern's $500 million package, which doesn't include the roughly $200 million in Sirius stock he's received for meeting subscriber targets. Depending on the health of the combined company, Stern and his agents may be in for a tough negotiation.

"The question is, is there anyone out there who would pay him $701 million," asks Scott Cleland, a Washington-based analysts with Precursor. "Good luck."

Stern could go back to AM-FM radio, but even then it's unlikely he'd pocket anywhere near his Sirius pay. Stern and his team took in an estimated $30 million a year when he was at Infinity Broadcasting, now known as CBS Radio (CBS, Fortune 500).

To be sure, programming costs have already come down as a percentage of revenue as sales have doubled in recent years. Last year, for example Sirius' programming and content costs were about 20% of total revenue, down from 36% in 2006. Still, the overall number continues to rise. Sirius is expected to have $231 million in programming costs this year, up from $226 million in 2007, according to Watts, the Cowen analyst.

Sirius declined to comment. An XM spokesman did not respond to requests for comment. People familiar with the company and the programming deals say each contract is different in terms of renegotiation options in the event of a merger.

Watts, for one, thinks Sirius will wait until Stern's contract - it's most expensive - expires before seeking new terms. Watts says the more pressing issue is refinancing XM's $1.46 billion debt, a move he says could happen soon after the merger.

But expect programming to be next on the belt-tightening list. So while Howard Stern is still huge, his new contract could be less so.