Is there a bubble in the art market? Sales of high-end works defy expectations amid an expanding pool of oil-rich buyers.

Going...going...gone!
Record prices for masterpieces are defying expectations that art auctions would feel the impact of a slowing economy.
View photos
Luxury digs for pampered pets 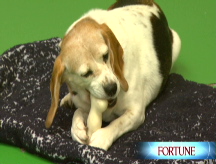 NEW YORK (Fortune) -- Luxury these days is a tale of two markets: consumers continue to snap up high-priced Louis Vuitton bags even as they balk at paying full price for Coach handbags. The same can be said of demand for works of art.

Recent auctions of high-end art on both sides of the Atlantic have been a huge success. The sales, fueled in part by rich oil barons, have defied expectations that a shaky global economy would curb demand.

In London, works by Claude Monet and Jeff Koons fetched stratospheric prices, with Monet's water lilies masterpiece, "Le Bassin aux Nympheas" selling for $80.5 million last week - well above its $47 million high estimate. In May, Francis Bacon's "Triptych, 1976" set the record for most expensive contemporary work at auction when it sold for $86.3 million at Sotheby's in New York.

Trendy categories like post-WWII and contemporary art have seen triple-digit price gains since 2002, but the boom was supposed to end after the credit crisis hit last summer. Instead, buoyant sales are just the latest example of a market that seems impervious to the downturn driven by climbing oil prices, a floundering financial sector, and a looming U.S. recession.

One reason the auctions are still buzzing is the influx of commodity-rich buyers who chase trophy works and push prices to ever-loftier heights. Roman Abramovich, a London-based Russian oligarch, reportedly bought two of the top works at the New York sales in May: the $86.3 million Bacon triptych and Lucien Freud's "Benefits Supervisor Sleeping," which sold for $33.6 million, making Freud the priciest living artist.

Meanwhile, the Al-Thani family of Qatar was the reported buyer last year of Mark Rothko's "White Center (Yellow, Pink, and Lavender on Rose)" for $72.8 million. It was the highest price for a post-war work sold at auction at the time - a title now held by Bacon's "Triptych."

This trophy-lot frenzy, however, has obscured some underlying weakness.

"We have two markets going on," says Ian Peck, CEO of New York-based Art Capital Group, which provides financing against art assets. "There's the super-rich market, which is very active right now. Then there's the middle market, which is soft and patchy."

According to research firm ArtTactic, works priced at more than $1 million made up about 70% of the contemporary art auction volume this year. Lower-priced pieces, which are offered by the auction houses at day sales rather than at the high-profile evening auctions, were more likely to sell below their top estimates or to fail to sell.

This softness shows that middle-market buyers are balking at rapidly escalating prices. For example, this week Christie's featured six works by Damien Hirst at its day sale in London. Two didn't sell, including a medicine cabinet that was estimated at $690,000 to $880,000. In its last auction four years ago, the Hirst piece fetched $212,000, nearly three times its top estimate.

The high-end market, on the other hand, has been resilient thanks to a buyer's pool that is bigger and more global than ever. As recently as the late 1980s - when Japanese buyers bid up Impressionist art - American and European collectors were the only other major players, says Olivier Camu of Christie's in London. When the Japanese economy faltered, so did the art market, and prices fell precipitously in the early 1990s.

"The reason the market is doing so well is because it's so much deeper and broader," says Camu. Big bidders now also hail from the former Soviet Union, the Middle East, and Asia.

With growing demand for a limited supply, quality has been able to command record prices. The $80.5 million Monet, for example, was a rare masterpiece in top condition whose companion paintings are in museum or private collections or, in one instance, damaged.

Still, observers question whether even the trophy-art market can continue to soar as economic conditions deteriorate. "We think if there is a shift it could happen quickly," says Peck. "It would take one or two major pieces to do poorly, and that could trigger a chain reaction. It's a very neurotic sort of market."

5 ways to invest in a wristwatch
Related Articles