How to make accounting software cool 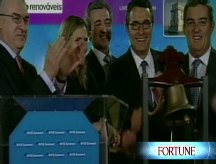 NEW YORK (Fortune) -- It was too weird to be true. In late 2006, a series of videos appeared on YouTube about a Willow Springs, Ill., resident named Kyle Bone who'd created a successful product called "the anti-shirt" - a shirt that exposed the area of one's torso that a normal tee shirt would cover and revealed the area that would otherwise be exposed. In short, said Bone, it cured the age-old problem of "farmer's tan."

Viewers who investigated Bone's site found a link to another site, www.ideawins.com, where they could enter an American Idol-like search for the best small business idea in America. And, oh, they would also download a free copy of Microsoft Office Accounting.

As you've probably guessed, Bone doesn't actually exist. He was invented by StrawberryFrog, a ten-year-old ad agency based in New York City. StrawberryFrog is one of those small, self-styled renegade shops like Mother, Brooklyn Brothers, and Our Man in Havana that big companies call when they are having trouble moving products and don't feel they are getting results from their large agencies.

Thanks to StrawberryFrog, more than two million people have downloaded the free version of the accounting software. (The company won't disclose how many users have upgraded to the paid version, but it claims the number was substantial.) Meanwhile, the agency's campaign was short-listed for a prestigious Lion award in June at the 2008 Cannes International Advertising Festival. "StrawberryFrog hasn't been around that long," says Jane Bedford, founder of The Bedford Group, a consulting firm that helps large corporations select ad agencies. "But they are very well known for their creative work and their digital skills."

In this case, Microsoft (MSFT, Fortune 500) was struggling to sell software to small business owners. According to the research firm IDC, Microsoft had a mere 3% share of the accounting software market for U.S. companies with fewer than 100 employees. Its largest competitor, Intuit's (INTU) QuickBooks, enjoyed a 24% share.

These are not the kind of numbers that warm the heart of Steve Ballmer, Microsoft's CEO. So Microsoft snubbed its longtime agency, the Interpublic Group's McCann-Erickson Worldwide, and turned to StrawberryFrog to craft one of its signature out-of-the-box campaigns for Office Accounting.

The people at StrawberryFrog say they don't do traditional ad campaigns. They prefer to say they craft "cultural movements" for their clients, which include such blue-chip names as PepsiCo Frito Lay, Morgan Stanley, Procter & Gamble (PG, Fortune 500) and Disney (DIS, Fortune 500). By this, the agency means, it strives to come up with ideas that get consumers talking on Facebook, posting videos on YouTube and twittering with each other on their cell phones. "We have to stop thinking about only selling a product and instead think about activating a massive virtual community," says StrawberryFrog founder and CEO Scott Goodson.

Microsoft and StrawberryFrog decided early on that it would be difficult to get small business owners who were already using QuickBooks to go through the hassle of moving all their data from one accounting program to another. Instead, they targeted small entrepreneurs who might not be using accounting software at all. "We noticed a lot of small business owners were doing their accounting in a very old fashioned and sub-optimal way," says Paul Prokop, group product manager for Microsoft Office Accounting. "They were sticking Post-Its on their computers. They were keeping records in shoeboxes."

Not surprisingly, StrawberryFrog discovered these potential customers weren't interesting in talking about crunching numbers. They much preferred talking about business ideas. The ad agency and the software giant decided to tap into their zeal by creating a Web site called IdeaWins where entrepreneurs could download a free version of Office Accounting and enter Microsoft's search for the best American small business idea.

How would people find IdeaWins? StrawberryFrog would drive them there. It arranged for free copies of Office Accounting to be parachuted into Willow Springs, Ill., Bone's purported hometown. Soon after, videos of the event - some of them made by townspeople and others by the agency - appeared on YouTube. StrawberryFrog auctioned off anti-shirts on eBay. The agency seeded small business blogs with comments about IdeaWins. In January 2007, the ad shop set off in the IdeaWins Ultimate Challenge R.V. to hand out hats and t-shirts and collect ideas from entrepreneurs in Seattle, New York, Las Vegas and Chicago.

Microsoft ended up with more than 7,000 ideas. In March 2007, a trio of judges - Carolyn Kepcher, a veteran of Donald Trump's The Apprentice series; Los Angeles maternity wear designer Liz Lange; and Microsoft corporate vice president Chris Capossela - selected four finalists. They included hip-hop inspired poetry group from New Jersey that wanted to start a restaurant and a school, a Florida woman with an idea for a do-it-yourself wallpaper business, an Illinois woman with an upscale clothing rental proposal, and a Maryland resident with a plan for an "organic beauty bar."

The judges announced the winners - the poetry guys from New Jersey - on NBC's Today Show. Microsoft couldn't have been happier. "We were absolutely stunned by the response to the contest," says Prokop. "That's the kind of publicity you can't buy."

The software giant and its ad agency are currently working on a new campaign for the next version of Office Accounting, which will be available later this year. Meanwhile, Microsoft says thousands of people continue to download the current edition on www.ideaswins.com.

It's not clear yet if IdeaWins increased Microsoft's share of the accounting software market. IDC hasn't released its 2007 market share figures yet. But Microsoft and StrawberryFrog can took comfort in this: A bunch of consumers seem to think Microsoft Office Accounting is actually kind of cool now. Who would have thought such a thing would be possible with small business accounting software?