From California to Arizona, demand for sites for solar power projects has ignited a land grab. 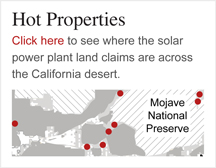 (Fortune Magazine) -- Doug Buchanan grins with relief when he sees the carcasses. He has just driven up a steep dirt road onto a vast, sunbaked mesa overlooking the Mojave Desert in western Nevada. There, a few feet from the trail, lie the corpses of two steers. A raven perches on one, the only object more than three feet above the ground on this pancake-flat plateau. Cattle, dead or alive, qualify as good news in Buchanan's line of work. If cattle are present, that means grazing is permitted, and that in turn means that this land is most likely not protected habitat for the desert tortoise.

Buchanan, 53, is scouting sites for a solar power company called BrightSource Energy, an Oakland-based startup backed by Google (GOOG, Fortune 500) and Morgan Stanley (MS, Fortune 500). The blunt, fifth-generation Californian, who used to survey the same area for natural-gas power sites, knows that the presence of an endangered species such as the tortoise could derail BrightSource's plans to build a multibillion-dollar solar energy plant on the mesa.

BrightSource badly wants these 20 square miles of federal land on what is called Mormon Mesa. The company was in such a hurry to stake its claim with the U.S. Bureau of Land Management that it applied for a lease sight unseen. That's an expensive gamble for a startup, given that application fees alone run in the six figures. "I usually like to go out and kick the tires before filing a claim," Buchanan says, "but there's a lot of competitive pressure these days to move fast."

That's putting it mildly. A solar land rush is rolling across the desert Southwest. Goldman Sachs, utilities PG&E and FPL, Silicon Valley startups, Israeli and German solar firms, Chevron, speculators - all are scrambling to lock up hundreds of thousands of acres of long-worthless land now coveted as sites for solar power plants.

The race has barely begun - finished plants are years away - but it's blazing fastest in the Mojave, where the federal government controls immense stretches of some of the world's best solar real estate right next to the nation's biggest electricity markets. Just 20 months ago only five applications for solar sites had been filed with the BLM in the California Mojave. Today 104 claims have been received for nearly a million acres of land, representing a theoretical 60 gigawatts of electricity. (The entire state of California currently consumes 33 gigawatts annually.)

It's not just a federal-land grab either. Buyers are also vying for private property. Some are paying upwards of $10,000 an acre for desert dirt that a few years ago would have sold for $500.

No doubt the prospect of potential riches is overheating expectations. But California and surrounding states have mandated massive increases in renewable energy in the next few years. That has led some experts at Emerging Energy Research of Cambridge, Mass., to predict that Big Solar could be a $45 billion market by 2020.

Meanwhile, the land rush is setting the stage for a showdown between solar investors and those who want to protect a fragile environment that is home to the desert tortoise and other rare critters. The Southwest is on the cusp of what could be a green revolution. And the biggest obstacle of all may be ... environmentalists.

Over the past year a parade of executives bearing land claims have made the trek to a stucco BLM office just off the interstate in the dusty city of Needles, Calif., a 110-mile drive south from Las Vegas. (It's the town where the late "Peanuts" cartoonist, Charles M. Schulz, briefly lived as a boy; in the comic strip, Snoopy's brother Spike is a resident.) The Bush administration has instructed the BLM to facilitate renewable-energy projects (along with nonrenewable ones). But Sterling White, the BLM's earnest Needles field manager, is also concerned about what could happen if they transform the Mojave into a collection of giant power stations. "One of our biggest challenges is the cumulative impact of these projects," he says.

Nearly 80% of the land that White's office oversees is federally protected wilderness or endangered-species habitat. That leaves about 700,000 acres for solar power plants, only some of which are near transmission lines. Land leases are handed out on a first-come, first-served basis, but White is also supposed to weed out speculators from genuine solar developers based on loose criteria such as who is negotiating with utilities and who is applying for state power licenses. White has yet to approve a single lease, but he has summarily rejected four because they lie in protected-species habitat.

Solar prospectors tend to be as secretive about their land as forty-niners were about the veins of gold they discovered. Most bids are placed by limited-liability corporations with opaque names that conceal their ownership. And no one has been as quick to move into the Mojave - or as tightlipped about it - as Solar Investments.

That entity, it turns out, is Goldman Sachs's (GS, Fortune 500) solar subsidiary. The investment bank's designs on the desert are a topic of intense interest and speculation. Goldman declined to comment. But here's what we know:

Solar Investments filed its first land claim in December 2006 and within a month had applied for more than 125,000 acres for power plants that would produce ten gigawatts of electricity. Many of the sites lie close to the transmission lines that connect the desert to coastal cities. (Goldman has also staked claims on 40,000 acres of the Nevada desert.) **

Nobody expects Goldman to begin operating solar plants. It will probably either partner with another developer or sell its limited-liability company (and its leases) outright. The firm has been making the rounds of solar developers. "The conversation's been pretty wide-ranging, primarily as an investor interested in financing deals," says one solar energy executive approached by Goldman. "But there's clearly an element of interest in our technology." Goldman has requested permission to install meteorological equipment on its sites and is evaluating "competing technologies, including solar dish systems, power towers, and large-scale photovoltaic arrays," according to a letter Goldman sent to the BLM in August 2007.