Against all odds, the smaller mortgage guarantor may have put itself in an even tighter spot than its more-famous sibling.

Dodd: Mortgage 'cops not on beat' 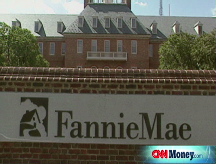 NEW YORK (Fortune) -- For years Freddie Mac has been overshadowed by its larger sibling Fannie Mae. But now Freddie seems to be coming into its own - and not in a good way.

Shares in the mortgage company plunged for a fourth straight day Monday as investors struggle to grasp the true state of its financial health.

Fannie and Freddie own or guarantee around half the mortgages outstanding in the U.S., so the debate has implications well beyond the stock market - a fact acknowledged in Sunday evening's statement of support for the firms from Treasury Secretary Henry Paulson.

Bulls say the companies, both of which endured bruising accounting scandals earlier this decade, have plenty of cash on hand and that both firms are in compliance with their regulatory capital requirements. Beyond that, Paulson's comments indicate that the firms can expect government assistance, via big credit lines from the Treasury and possible government stock purchases, if they run short of capital.

Yet bets against Fannie (FNM, Fortune 500) and Freddie (FRE, Fortune 500) stock continue to mount, as skeptics wager that losses tied to declining house prices, together with the firms' enormous leverage, will wipe out shareholders.

Skeptical investors and analysts believe that falling house prices will feed a surge in mortgage defaults that will leave the firms with losses in the tens of billions of dollars. That could wipe out the firms' existing capital cushions and force the companies to raise more money on punishing terms - or perhaps sell stock for a pittance to the government.

After opening higher Monday following Paulson's remarks and a successful sale of short-term debt at Freddie, both stocks resumed their slide in the afternoon, with Freddie dropping 17% to $6.43 and Fannie sliding 5% to $9.75. Fannie has lost half its value this month; Freddie is down 63%.

The steeper decline in Freddie shares reflects in part the observation that even if both firms are under the gun, Freddie's finances look worse.

At the end of the first quarter, the Reston, Va., company's balance sheet showed assets of $803 billion and shareholder equity - a measure of a firm's net worth - of just $16 billion. That means Freddie has just a dollar in equity for every $50 of mortgages and other assets it holds - a thin cushion indeed when house prices are falling.

Another measure of Freddie's balance sheet, reflecting its guarantee obligations as well as its mortgage portfolio, shows the firm holds just 70 cents worth of equity for every $100 of business on its books.

"Is this enough equity when your business consists of buying and guaranteeing mortgages?" Len Blum, a managing director at New York investment bank Westwood Capital, writes in a recent report. "How about when you conduct these activities in markets falling by 20% or more?"

If those numbers aren't scary enough, the Freddie math gets worse. Using the so-called fair-value balance sheet - whose numbers reflect the current value of assets, rather than their historical cost - Freddie's shareholder equity is actually negative to the tune of $5.2 billion.

And Blum says there are other signs of ill health on Freddie's balance sheet. He notes that Freddie carries a $16.6 billion deferred tax asset - an asset that is valuable to the company only when it makes money. Freddie has lost $3.7 billion over the past three quarters.

Investors are worried about Fannie Mae as well, but Blum says that by comparison with Freddie it looks like the very picture of ruddy good health. The firm had $843 billion in assets at the end of the first quarter, against $39 billion of equity - a ratio of about 22-to-1.

"The company's capital and liquidity resources will enable it to continue to serve its public mission as it has always done," said CEO Richard Syron in a statement Sunday.

Indeed, both firms have said they expect to emerge from the housing bust intact. In recent periods the firms have been involved in a staggering 80% of U.S. mortgage originations, as the private mortgage industry has essentially collapsed under the weight of bad subprime loans.

That near monopoly has allowed Fannie and Freddie to raise prices, making recent transactions more profitable. Fannie CEO Daniel Mudd said on the firm's earnings conference call this past spring that Fannie expects to "feast" on the mortgage market in the absence of meaningful competition.

Even so, the shares continue to fall as investors worry that the firms will be forced to raise more money by selling common shares at steeply reduced prices. Fannie has already raised more than $10 billion and Freddie some $6 billion, but Freddie has yet to collect on a promise to raise an added $5.5 billion later this year.

Analyst Paul Miller at FBR Capital Markets calls the latest selloff an instance of "recapitalization overhang" - meaning investors have become so convinced that the firms will raise new money by selling stock that they flee the shares in haste.

Blum says he expects Freddie to be able to raise new money, but he doubts $5.5 billion will be enough. He believes the government will end up buying shares, at sharply lower prices, before the housing bust is over.

Others believe the government will end up taking control of both Fannie and Freddie, in order to preserve their low-cost financing. Freddie Mac and Fannie Mae "don't need more capital - at least not immediately," writes Chris Whalen at Institutional Risk Analytics. "But they do need access to the capital markets at preferential rates."

The $5 trillion mess
Prophets of the credit crisis
Related Articles