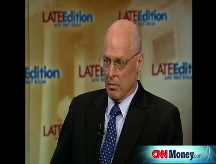 NEW YORK (Fortune) -- The U.S. consumer is feeling pinched - and to listen to American Express, the pain is only going to get worse.

American Express (AXP, Fortune 500) delivered some ugly news after the market closed Monday, posting a smaller-than-expected second-quarter profit and withdrawing its 2008 earnings guidance, saying the economic environment "has weakened significantly" since it offered up its financial projections back in January.

The deterioration was notable "particularly during the month of June," the company said. And American Express says that while loan write-offs spiked last month, it expects loan losses to rise even from those levels in the second half of 2008, as the consumer pullback feeds through to businesses and the rest of the economy.

"Over the past few months, we have seen clear signs the U.S. economy is weakening," chief executive Ken Chenault said, noting falling house prices and rising unemployment. As a result, he said, "Cardmember spending slowed sharply in the last half of the quarter," even among the company's best customers.

Chenault said on a postclose conference call Monday that he was "disappointed" in the numbers, which fell far short of Wall Street analysts' estimates. American Express abandoned its earlier forecast of 4%-6% earnings growth for the year, citing rising charge-offs on past-due loans. The company also said it would accelerate "re-engineering efforts" in the second half, meaning more jobs are likely on the way.

American Express made $653 million, or 56 cents per share, for the quarter, down from the year-ago $1.06 billion, or 88 cents per share. Analysts surveyed by Thomson Financial were looking for an 82-cent profit. American Express said the latest quarter reflected a $374 million addition to its credit loss reserves, as the effect of falling house prices and rising unemployment "was evident even among our longer term, superprime cardmembers."

The comments strike a much more pessimistic tone than those heard earlier from Bank of America (BAC, Fortune 500) chairman and CEO Ken Lewis, who said on a conference call earlier Monday that he views BofA's consumer exposure as "manageable."

Michael Taiano, an analyst at Sandler O'Neill in New York who has a "Hold" rating on American Express said the company is paying the price for its rapid loan growth in recent years. Now, with the effect of falling house prices and job loss rippling through the economy, American Express faces rising losses as more loans go sour - at a time when the company holds a substantial portfolio of younger loans that are by their nature more likely to go bad.

Indeed, the company's earnings presentation indicates that the biggest deterioration in credit performance came among customers who have had American Express cards for between two and four years. Accounts 30 days past due jumped 62% from a year ago among U.S. customers holding cards for 24 to 36 months and 58% for customers of 36 to 48 months, the company said.

Taiano cut his rating on the stock to "Hold" from "Buy" earlier this year, reasoning that an economic slowdown and falling house prices would combine to slow earnings growth at American Express.

Even so, he said he was surprised by "the degree of acceleration" in credit losses in the latest quarter. "They're in for a challenging few quarters ahead," he said.

Consumer debt surges $8B in May
Related Articles