Demand for high-level talent is surprisingly robust, especially for senior managers who are willing to move.

By Anne Fisher, senior writer
Last Updated: August 8, 2008: 12:20 PM EDT
Sign up for the Ask Annie e-mail newsletter
Where the jobs are 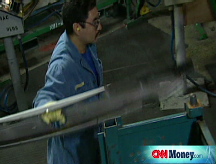 (Fortune) -- Despite the slump at lowlier levels of the job market, there's currently a war for senior management talent. In fact, 70% of executive recruiters surveyed by networking organization ExecuNet (www.execunet.com), say there's a shortage of people who can step in and run things.

Where is the most job growth for senior-level positions now?

The South and Southeast are No. 1, while the West placed second, according to the 2008 Executive Job Market Intelligence Report, a detailed research study from ExecuNet. In third place is the Southwest, notably Texas; followed by the Midwest; while the Northeast and New England are in fifth place. That's a slight change from 2006 results, when the top 2 regions were the same, but the Mid-Atlantic came in third, followed by the New York City metropolitan area and the Southwest.

"Businesses are expanding in the South and Southeast partly because of lower costs," says Mark Anderson, ExecuNet's president and chief economist. "And the really strong, growing industries right now doing the most hiring, are high tech, health care, pharmaceuticals, and energy. So the regional shifts represent where those industries tend to be concentrated."

Still, "there are a lot of executive-level general management and operations jobs available just about everywhere - even in Midwestern manufacturing, in spite of what the auto industry's troubles might lead you to suppose," Anderson adds.

Recent postings on ExecuNet's site offer a couple of examples: a VP of quality control position at a capital-equipment manufacturer in Wisconsin that pays up to $150,000 with a bonus of $20,000 or more, plus profit-sharing; and a VP of sales job with an electrical equipment maker in Indiana that pays up to $200,000 annually with a 30% bonus and stock options.

Demand for talent exists even in the otherwise troubled financial-services industry, which has hung out high-level help-wanted signs for people with turnaround skills and expertise in risk management.

Companies doing the most executive hiring aren't necessarily the biggest, the ExecuNet study found. Employers with revenues between $51 million and $200 million are expanding their senior-level management teams by almost 30% this year, for instance. By contrast, companies with sales of $1 billion or more plan to hire only 12% more executives.

In every region and at companies of all sizes, executives who bring engineering expertise will be in most demand of all.

"Companies are placing a greater emphasis on research and development, as well as operating efficiency," Anderson observes. "Engineers have become a scarce resource." That's good news, by ExecuNet's lights. Says the report: "[Engineers] are at the epicenter of innovation, stimulating growth and forming the underpinning of a robust economy." Which may eventually mean more jobs for the rest of us.

In this market, fewer than one-third (32%) of managers earning $100,000 a year or more believed relocation was necessary for advancement, according to the study. That's down from 46% who believed that in 2006.

One reason is that "the computer and phone technology we have now enables people to do business from just about anywhere," says Anderson. "So companies are rapidly moving toward more mobile workers, remote workers, telecommuters - whatever you want to call them - even at the very senior levels, where executives will often try out a job from a distance before relocating, or even instead of relocating at all."

Another factor: In a world of decreasing loyalty, companies are less eager to reimburse executives for the cost of moving. "Organizations don't want to go to the expense if an executive is only likely to stay with the company for three years or less," observes ExecuNet vice president Lauryn Franzoni. "On the other side, executives are reluctant to uproot their families and working spouse for a transfer that doesn't have a clear reward at the other end. If they think the industry or company could contract and the job they've been offered could be eliminated, the risk is too great."

Executives in other countries, by the way, have no such qualms. More than 80% of senior managers ExecuNet surveyed in Europe, Asia, and Latin America are willing to pull up stakes, even to relocate across national boundaries.

"A staggering 40% of these rest-of-the-world executives say that the proliferation of online job boards led them to actively explore opportunities abroad," Anderson says. That compares to just 7% of U.S. senior managers who say the same.

Readers, what do you think? Would you relocate for the right job opportunity? If you've ever moved for a job, how did it work out? Any regrets, or tips for those who may be considering moving? Where do you wish you were working? Do you see jobs available for high-level positions? Post your thoughts on the Ask Annie blog.