Momentum isn't showing any signs of a dip; sales blow past expectations. 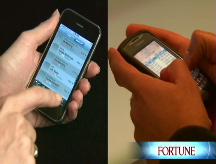 One month after its debut, Apple's new iPhone has hit the 3 million sold mark, according to analyst Michael Cote of the Cote Collaborative.

"They are seeing unprecedented demand," says Cote, adding that there appears to be no signs of a let up yet. Cote, a former T-Mobile executive, has been extremely accurate with wireless predictions in the past.

Three days after the new iPhone's July 11 debut, Apple announced that it had sold 1 million iPhones. For comparison, it took 74 days for the original iPhone to hit the one million sold mark. The new 3G iPhone has already sold nearly half as many as the original iPhones in total.

As Fortune.com first reported, the price of the iPhone was cut in half, and with a $199 price tag - excluding the $2,400 wireless subscription costs over two years - it put the phone within reach of a much broader market than the original $400 iPhone.

Second, the new iPhone got to capitalize on the consumer enthusiasm for the original iPhone's touchscreen design. Mobile phones are very much a fashion statement, and touchscreens are hot. A good comparison is Motorola's Razr, which ushered in the ultrathin style and sold 100 million units.

Another big boost is geography. International sales have helped take the iPhone to places it hasn't been before. The new iPhone is selling in 22 countries and Apple said last month that it was "confident enough" that it will launch sales in 20 more on Aug. 22, with a target of 70 by year end. The original iPhone was sold in four countries.

But analyst Cote predicts that Apple will find it challenging to keep current outlets supplied while attempting to take on even more. "The demand is so strong it may impact or delay the new countries coming on," Cote says.

That probably isn't the worst problem Apple could face.

Apple iPhone sold out in 21 states