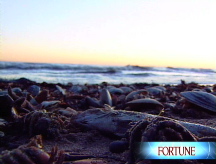 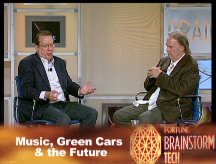 (Fortune) -- By any measure, it is a long way from the Park Avenue headquarters of JPMorgan Chase, the global investment bank that generated revenues of $100 billion last year, to the dusty streets of Kampala, Uganda, where a poor woman can buy a new cook stove for about $6.

What connects the big bank to that small transaction is the business of carbon trading.

JPMorgan (JPM, Fortune 500) is quietly pushing the boundaries of the carbon market - a sprawling international experiment to reduce the greenhouse gases that cause global warming - by subsidizing the distribution of efficient cooking stoves in poor countries. Because the new, improved stoves save fuel and produce less carbon dioxide than traditional stoves, they generate so-called carbon credits that can be sold to companies or individuals who want to offset their own emissions.

The business is complicated, controversial and potentially very profitable.

How profitable? If all goes according to plan, JPMorgan will expand its support for cook stoves from Uganda into Kenya, Ghana, Cambodia and beyond. Each stove is estimated to reduce carbon dioxide emissions by two to three tons a year; each ton generates a credit worth $10 or $15 a year, and potentially more, for the bank.

"If you can distribute 10 million stoves, you are talking about a substantial tonnage of carbon," says Odin Knudsen, who oversees JPMorgan's carbon finance business. Do the math - you could be looking at a business with modest costs and between $200 million and $450 million a year in revenues.

JPMorgan isn't alone. All the big global investment banks - including Barclay's (BCS), Citigroup (C, Fortune 500), Goldman Sachs (GS, Fortune 500), and Merrill Lynch (MER, Fortune 500) - are hurrying into carbon finance. Point Carbon, a consulting firm, says the global carbon markets generated $59 billion in revenues in the first half of 2008 - almost as much as the markets did in all of 2007.

Instead of directly cutting their own emissions, these companies choose to buy credits, usually from a bank, a company or a nonprofit - frequently in the developing world - that has come up with a less expensive way to curb greenhouse gases.

So, for example, big brands in the U.S. like Google, Yahoo or Dell or industrial companies in the European Union offset their emissions by financing the capture of methane gas at chicken farms in India or landfills in Mexico, by paying refrigerant and fertilizer plants in China to trap their industrial gases, or by underwriting wind farms in Sri Lanka. (For more, see Carbon finance comes of age at Fortune.com.) These deals are supposed to reduce pollution and bring clean technology to places that otherwise couldn't afford it.

The cook-stove project represents a new twist. Instead of financing a single emissions-trapping project, JPMorgan and its partners are enabling thousands and, potentially, millions of small transactions. Similar projects that aggregate lots of small transactions are in the works. "We're working on everything from cook stoves in Uganda to energy efficiency in China to CFLs [compact fluorescent light bulbs] in Mauritius," says JPMorgan's Knudsen.

JPMorgan got involved in the cook stove business last spring when it bought Climate Care, a small British firm that has been a boutique provider of carbon offsets since 1997. Climate Care developed a methodology for reducing CO2 emissions by distributing efficient stoves that won approval under the Gold Standard, a set of quality controls backed by nonprofit groups.

The value of the efficient stoves is that they require less wood, emit fewer greenhouse gases and reduce pollutants that damage people's lungs, especially when they cook indoors, according to Tom Morton, a former Climate Care executive who now works for JPMorgan in Nairobi, Kenya. "In much of the developing world," he says, "wood is being cut down faster than it is growing."

In Uganda, JPMorgan invested in a company that makes the stoves. The bank also supports the project with computer services and small loans to businesses that want to buy or distribute the stoves, thus reducing their costs.

In exchange, the bank gets carbon credits that it sells to such buyers as Land Rover UK, which promises to offset the carbon emissions of its new vehicles, and Aviva, a big British insurance company. Climate Care also sells offsets to consumers who want to mitigate their personal emissions.

Controversy arises around such efforts for several reasons. In this case, the money being generated by the carbon credits is greater than the retail price of the stove.

JPMorgan won't say how much the credits are worth but credits on the voluntary market sell for anywhere from $5 to $15 a ton. The cook stove credits are likely to be priced at the upper end because they benefit poor people as well as the environment, giving corporate buyers an appealing story to tell. (See, for example, this video from Land Rover.)

Another problem is that it's unclear whether the money from carbon credits was essential to get the stove project going. The approval under the Gold Standard should help persuade doubters.

If projects like the Uganda cook stoves are approved under the Kyoto protocol, which governs the regulated carbon markets, the business will become even more lucrative. Credits on the European Union's regulated market are currently trading for more than $32 a ton.

Dell's plan to help save Earth