Designing the iPhone of diapers

Innovation isn't just for Google and Apple. How Kimberly-Clark gave birth to a lucrative new product. 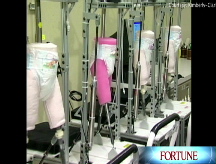 (Fortune Magazine) -- In a windowless room at Kimberly-Clark's research offices in Neenah, Wis., a mother hoists her baby girl onto a table painted on its side to look like a school bus. Photos of puppies and kittens decorate the walls, and a mobile with Sesame Street characters hangs overhead. A nurse takes out a measuring tape. "This is Caleine - C-A-L-E-I-N-E," says Terri Berghuis, the nurse, as a woman in a blue lab coat standing to the side takes notes. "Her waist is ... 460 [millimeters]. And her right pant line is ... 320." Caleine is wearing a pair of size four Huggies Supreme Natural Fit diapers, Kimberly-Clark's most technically advanced disposable diaper ever - except that this particular pair is a bust. It's leaking.

Usually that's a no-no for a company that sold $4.2 billion worth of diapers last year on the premise that its diapers don't leak. But today failure is the goal. Every 15 minutes for the past hour, Berghuis has been using what looks like a giant syringe to pump 60 milliliters of warm saline solution into Caleine's diaper. Down the hall in a waiting room, 15 or so other babies, also wearing Huggies Supreme Natural Fit diapers in varying states of sagginess, are noisily playing with trucks and watching SpongeBob SquarePants. They're an adorable collection of diaper blowouts about to happen, and when they finally do, K-C's researchers record each failure in obsessive detail: how much the diaper weighed at the end, where the leak seeped out, how the diaper fit around the legs.

The goal of this forced-failure test, as Kimberly-Clark (KMB, Fortune 500) calls it, is to check that the diapers being churned out at the company's factories match the rigorous standards for Huggies Supreme Natural Fit, a product introduced in August 2006 that took nearly three years of research and design to create. The result was a hit product: The market research firm Information Resources (IRI) named it the most successful new nonfood brand of 2007, estimating that it brought in more than $170 million in revenue. Most significantly, Supreme Natural Fit has enabled K-C to narrow its market share gap with archrival Procter & Gamble (PG, Fortune 500), the long dominant maker of diapers. Since its release, Natural Fit has helped boost K-C's share by one to two percentage points, to 35% of the total diaper market, according to estimates by IRI. P&G still stands strong, with Pampers at 44% and Luvs at 8%, but every point of market share that K-C gains is hugely profitable. Last year the company's Personal Care division, dominated by Huggies, generated nearly $1.6 billion in earnings, or 60% of K-C's total.

When we think of innovation, it's easy to point to devices like the iPhone as exemplars of creativity. But if innovation is really just a $10 word for using new ideas to improve upon something, then the less celebrated ingenuity that's been poured into building a better diaper over the years can make it seem as wondrous as anything coming out of Apple. For an everyday item whose lifespan of use is measured in hours, the disposable diaper has an almost absurd level of technology packed into it. "The average person thinks of a diaper and thinks, What else can you do to it?" says Tom Melson, K-C's vice president of personal-care operations. As it turns out, a lot.

So you can say this is a story about innovation - or, more simply, about how Kimberly-Clark, No. 136 on the Fortune 500 and the company behind Kleenex, Kotex, and Cottonelle, set out to make something better than it was before.

"It started with a dilemma," says Craig Wanous, senior brand manager for diapers in North America, describing how company executives noticed their market share stalling a few years ago. "The category by its nature is going to follow birth rates, and those have been generally flat for a number of years." (The average U.S. mom now has two children, vs. four during the baby boom.) "So we started saying, 'How do we grow?'" The answer, they decided, was to motivate parents to pay more for diapers by trading up from other brands. Even within the Huggies family of products, the Huggies Supreme brand can cost as much as 30% more per unit at a retailer like Diapers.com than the regular Huggies Snug & Dry for a comparably sized diaper. The profit margins on the Supreme line are also better (though the company won't reveal just how good they are). "We don't play [low] price real well," says Bob Thibault, president of North American Kimberly-Clark's personal-care division. "Even though we work very hard to have an aggressive cost position, the market we want to play in is certainly premium and superpremium rather than economy-priced." In other words, K-C executives decided to let the private-label brands like Wal-Mart's Parent's Choice and other lower-priced diapers like P&G's Luvs battle it out on the price front. Instead, K-C would unveil something dramatically improved in their Supreme line and hope it would be good enough to persuade parents to pay extra for it.

To figure out what this better diaper should accomplish - aside from the obvious mandate to prevent leakage - K-C turned to its consumer-research team. Research pays off when it can piece together your inarticulate desires (example: "I feel I waste a lot of paper towels because sometimes the pieces are larger than I need") and translate them into product changes, however subtle (more perforations on a paper towel roll, so smaller pieces can be torn off for minor spills).

K-C's imperative was to get into the heads of new moms, or "Mom," as everyone at the company says (as in, "It's all about the benefits to Mom"). With the help of the research firm InterActive Solutions, K-C identified a sample of moms from different parts of the country, income backgrounds, and ethnicities to observe closely. In many cases they went into homes to do interviews; in others, they placed motion-activated cameras in the home to observe diaper-change routines and then watched the hours of footage at K-C headquarters. "No diaper change is the same, no baby is the same, and you're seeing different aspects every time," says Denise Nelson, a senior consumer strategist on the team that developed Supreme Natural Fit. Nelson plays some footage of a newborn getting its diaper changed, taken from one of the videocameras. You see the baby's legs continually springing up and the mom trying to straighten them as she puts on the diaper; clearly it's a struggle. Footage like that started pushing the team in the direction of thinking that a better diaper would be shaped to get around those legs and follow the curves of a baby's body.