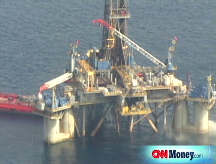 The Department of Energy said it is monitoring the situation in the Gulf and stands ready to dip into the Strategic Petroleum Reserve, an emergency repository of 700 million barrels of oil that the government controls.

"The Strategic Petroleum Reserve is a key safeguard to provide an added layer of protection for the American people during the event of a severe disruption of oil supply," the agency said in a statement.

Oil platforms in and around the Gulf of Mexico account for more than a quarter of U.S. oil production.

If production rigs are damaged by the storm, crude oil supply would be pinched. Andrew Lebow, an energy analyst at MF Global, said he believes the government would step in to mitigate any short-term supply loses. "The government will be a lot quicker to release crude oil out of the strategic petroleum reserve, should we lose any production."

Such a move from the government would bring comfort to the markets, said Lebow.

The report "sent natural gas down and crude is following," said Amanda Kurzendoerfer, commodities analyst at Summit Energy. "We have seen sometimes they do move together."

Jim Rouiller, senior energy meteorologist at Planalytics, a firm that predicts how weather will impact businesses, said crude prices were ready to fall because they had already been pushed higher Wednesday in anticipation of the storm.

Another factor in Thursday's price decline was a stronger dollar.

The majority of crucial rigs are located between the Houston Shipping Channel and New Orleans, and so the price of oil moved quickly as traders anticipated where Gustav would hit land, he said.

"As the projected path inwards changes," said Dingmann, "you have people's bets change." The last week in August is a popular vacation week, and so light trading volume also pushes the price of oil around more dramatically, said Dingmann.

Meteorological forecasters said it was too soon to know the storm's exact path. But the National Hurricane Center's projection models show Gustav heading toward Louisiana through the oil-rich region of the Gulf of Mexico by Sunday afternoon.

Gustav, once a Category 1 hurricane, weakened after it passed over Haiti and the Dominican Republic. The storm now threatens to intensify and become a hurricane again.

It doesn't necessarily take destructive hurricanes to cause major disruptions to oil drilling in the Gulf, however.

"The makeup of a storm can have all the difference," said Alaron Trading senior market analyst Phil Flynn. "Slow moving storms have a tendency to churn up underground pipelines, so you don't need a Category 5 to do a lot of damage."

Evacuations: Already on Wednesday, Royal Dutch Shell PLC (RDS) evacuated 400 staff from its off-shore oil rigs, according to Robin Lebovitz, a spokesperson for the company. It plans on bringing 270 more personnel ashore Thursday and it said it would complete a full evacuation by Saturday.

Shell said it expects that production at its east and west Gulf of Mexico platforms will be hampered as early as Thursday.

In addition, a recorded message on an information hotline at British Petroleum (BP) said the company was evacuating non-essential personnel from their offshore oil rigs.

ConocoPhillips (COP, Fortune 500) will remove 20 non-essential personnel from a platform in the central Gulf of Mexico, according to a statement. The company plans to remove another 58 personnel from the platform by Saturday, as Gustav approaches.

Timeline: The average hurricane halts oil drilling production for more than a week, according to the American Petroleum Institute. Rig workers are forced to evacuate two to three days before the storm hits, and as soon as it's safe to return, they have to check for damage before they can restart production.

The U.S. Department of the Interior estimates that 3,050 of the Gulf of Mexico's 4,000 platforms and 22,000 of the 33,000 miles of Gulf pipelines were in the direct path of Hurricanes Katrina and Rita in 2005. The cyclones, both of which reached Category 5 strength, destroyed 113 offshore oil and natural gas platforms and damaged 457 pipelines.

Since then, the industry began making changes to the structures. The Interior Department in April 2008 imposed more stringent design and assessment criteria for both new and existing structures located within particular Gulf of Mexico areas.

For example, drilling rigs moored to sea floor in the Gulf had been attached with eight lines, and are now required to be moored with 12 to 16 lines. New rigs are built higher out of the water than ones that were built previously, and old rigs were strengthened, according to Andy Radford, a policy advisor at API.

"We have learned from Katrina and Rita," said Lebow. "The infrastructure is a little bit stronger."

Refineries: While the oil rigs have been strengthened, however, refineries are vulnerable. The last new U.S. refinery was built in 1980, according to Lebow.

Oil refineries clean and process crude into usable products, like gasoline and heating oil. With 41% of the nation's refinery capacity in the Gulf Coast region, according to Lebow, a storm has real potential to disrupt distribution of gas and send prices at the pump higher.

Damage to refineries could create more long-term problems. "Refineries are a lot more complex," said Lebow. "It can take many days, sometimes weeks to get a refinery working again" after significant damage. "Some refineries took years to get back online after Katrina."