A horror movie site and TV channel funded by Sony, Lionsgate and Comcast is attracting Hollywood A-listers and lots of viewers. 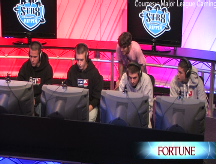 Megahit movies in hard times
Economic downturns have done wonders for the box office. Here are some of the greatest movies to hit the big screen during market slumps.
View photos

NEW YORK (Fortune) -- Two rifle-bearing lads enter what looks like an abandoned building. They are nervous, for good reason. Snarling vampires attack. There is violence. There is gore. There is even a heart-tugging moment when one of the humans finds his missing girlfriend - only to discover that she too is now a blood-thirsty creature of the night.

These freakish events unfold in a Web video that lasts only 4:48 minutes. It's the final installment of a six-part series entitled "30 Days of Nights: Dust to Dust," created by Spider Man director Sam Raimi's production company for Fearnet, an ambitious joint venture between Sony (SNE), Lionsgate (LGF) and Comcast (CMCSA, Fortune 500).

Like the vampires in "Dust to Dust," Fearnet inhabits two distinct worlds. It is a video-on-demand television channel that serves up free horror movies from the vaults of Sony and Lionsgate to 29 million digital cable homes.

Fearnet is also a Web site. It's not your typical billboard on the Internet that exists solely to drive traffic back to the old-media mothership either. Sony, Comcast and Lionsgate are enlisting Hollywood A-listers like Rami to explore new kinds of storytelling online. "This is a whole new canvas to paint on," said Diane Robina, Fearnet's president.

In the last year, the site's traffic has more than tripled, to 700,000 monthly users. A source close to Fearnet says the company expects to turn a profit next year.

Everybody's talking about Web video these days, but few companies are doing as good a job as Fearnet when it comes to luring talent and generating revenues. Even Google's YouTube, the largest pure-play Internet video site, is searching for ways to make money.

Fearnet is doing well because it's not betting solely on Web video and the advertising to support it. The company also sells ads on its television channel and collects fees from cable operators who carry it. What's more, Fearnet is also building a community of rabid horror fans by feeding them gossip and "Entertainment Tonight"-like coverage of the genre. Actor Heath Ledger gave the last interview before his untimely death this year to Fearnet.

Perhaps there are lessons here for Google (GOOG, Fortune 500) and others investing in Web video, like Disney (DIS, Fortune 500)-owned ABC and its fading online series, "The Squeegees." You have to do more than just sell Web ads. And you have to keep luring your audience back.

Leveraging a community of gore-seekers

Fearnet's saga began four years ago when Sony and Comcast, the country's largest cable operator, teamed up to buy the MGM film library for $2.9 billion. The idea was to mine Sony and MGM's vaults to create niche television networks. Sony, with its vast library of horror titles, thought the genre was ripe for television. "It just stuck out like a sore thumb," recalled Steve Mosko, president of Sony Picture Television. "Nobody was really tapping into it."

Meanwhile, Lionsgate, the studio behind such gory pleasures as "Saw" and "Hostel," was exploring a similar idea. The three joined forces and launched Fearnet on Halloween 2006.

Their timing was serendipitous. Raimi and his partners at Ghost House, who had already been experimenting, without much success, with spooky shorts for mobile phones, approached Fearnet about making Web videos. "Sam Raimi loved it because it was as way to play with a new format and interact with new talent," said Joe Drake, president of Lionsgate's motion picture group and a principal in Raimi's production company.

Fearnet.com scored with the Ghost House videos. The joint venture has released three multi-part Web videos, including "Devil's Trade," the tale of three teens who make the mistake of purchasing a cursed wooden cross on the Internet. (Where else would you find such a thing these days?) The three series drew 11 million viewers on the video-on-demand channel and the Internet.

The site also did well with "Buried Alive," an original series for the Web produced by Jim Burns, an MTV producer, about a group of young people, each of them entombed in a coffin in a strange underground world. Homegrown footage of red-carpet premieres of "Hostel: Part II" and other fright flicks have also been popular.

"What Fearnet.com has done well is create a community around it," said Ben Mogil, an analyst at Thomas Weisel Partners. "In many respects, it is similar to fan sites for sports teams. It has a very non-corporate feel which is a plus for fans."

Fearnet's reach on television is also growing. In July, the joint venture announced a distribution deal with Time Warner Cable (TWC), the nation's second- largest cable operator that will add 8.4 million potential Fearnet viewers. The channel has also attracted advertisers like Unilever (UL) and every Hollywood studio, all of which are eager to reach young males.

What does Fearnet future look like? Sony's Steve Mosko wants it to keep producing original Web content. And he thinks it can migrate to other platforms like DVD which may be risky given that DVD sales are slowing. "Fearnet.com is just the first window of a long product cycle," Mosko promised.

Sounds like Fearnet will be around for a while. Just like those pesky vampires in "Dust to Dust" who just won't die.