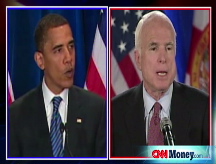 More Videos
It's the economy, stupid 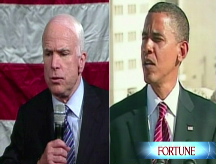 DENVER (Fortune) -- Despite Bill Clinton's powerful endorsement of Barack Obama Wednesday night, there's still plenty of resentment inside Team Hillary over the fact that she's not on the ticket and her strategists aren't on the campaign. But when it comes to economic policy, the Democrats are jelling into one big happy family.

"Everyone who was with Hillary Clinton is now with us," Jason Furman, Obama's economic policy director, tells Fortune. "The campaign has deepened and broadened its economic bench in the general election."

Managing this team of large and accomplished egos is the 38-year-old Furman, a child of Greenwich Village (and liberal parents) who was so intellectually precocious he had to trek uptown to Columbia University for math and physics because his high school didn't offer sufficiently advanced courses. He later obtained his PhD in economics from Harvard. Despite his relative youth, Furman so far seems adept at meshing the two campaign cultures. "These are good friends of mine," he says of the Clinton folks. (He could have substituted "former bosses of mine;" Furman once reported to Sperling, and later to Rubin.) After the primary campaign was over, he notes, "I reached out to them and they reached out to me."

Furman's job is made easier by the fact that Clinton and Obama ran on virtually identical economic agendas. The biggest difference was that Clinton's healthcare plan mandated that individuals be covered, and Obama's didn't. Since the primary campaign ended, Obama has borrowed one Clinton idea - a healthcare tax credit for small business.

Furman runs the Obama economics shop through regular conference calls with advisers - coupled with ad hoc meetings to respond to news events. On July 13, after the plunge in Fannie Mae and Freddie Mac share prices prompted the Federal Reserve and Treasury Department to consider intervention, Furman's first call was to Summers. A conference call to a broader group followed. Then Furman reported the results to Obama. Within hours, the campaign issued a statement saying any government plan should "maintain a steady flow of capital to the housing market" and should protect taxpayers rather than bail out shareholders.

The politics of economics is hardly new territory for Furman. He was Kerry's economic policy director in 2004 and worked on the Gore campaign in 2000. Before joining Obama in June, Furman was running the Hamilton Project, a centrist think tank founded by Rubin and former deputy Treasury Secretary Roger C. Altman.

Furman's own reputation is as a centrist. When Obama tapped him there was a mini-uproar from the left wing of the party over his defense of Wal-Mart (WMT, Fortune 500) and free trade agreements. Furman reminded his critics of his work opposing efforts to privatize Social Security, and the storm settled.

"When Barack hired me," Furman says, "he told me my job was to be an honest broker and incorporate different points of view."

Now that he's integrated Team Clinton into the campaign, that job is done. If Obama wins, Furman's toughest (and potentially most influential) task comes when it's time to advise the president on how to dole out all those prime government jobs - from Treasury Secretary on down. Those Clinton folks are no dummies on the workings of Washington: Being loyal and visible soldiers now means being front and center for the big titles later.