The deal boom isn't over for drugmakers.

5 record-breaking biotech deals
The one bright spot in M&A in 2008 are drugmakers, where giant pharmaceutical companies are paying record amounts for biotechs to replenish their pipelines.
View photos
Store your health records online 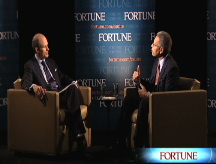 NEW YORK (Fortune) -- Overall, dealmaking may be in a slump, but Big Pharma has been buying up biotech firms at a record pace - it's now the fastest-growing M&A sector, with deal value up 87% this year.

Of the 32 deals proposed in 2008, the biggest is Roche's $44 billion bid for total control of Genentech (DNA), the biotech shop of which it already owns a controlling share. Another headline grabber is Bristol-Myers' (BMY, Fortune 500) $4.3 billion offer for ImClone (IMCL) (yes, of the Martha Stewart scandal).

The deals are a big departure from the past, when cheaply licensing a single drug was the standard. "This was unthinkable a few years ago," says Steven Wilcox, head of life sciences M&A at Ropes & Gray. "In licensing, you pay a little bit up front and a lot on the back end, but only if the drug is successful. In a merger, it's all the cost up front." That makes them more expensive and much riskier deals.

Pharmaceutical companies are spending their mountains of cash piled up from years of strong sales. Globally, the industry sold $712 billion worth of drugs in 2007. Yet the industry is expected to lose billions of dollars of revenue as top-selling drugs lose patent protection, and generic makers sweep in to sell much cheaper versions of the same drugs. The best-selling drug in the world, Pfizer's (PFE, Fortune 500) Lipitor, generated $8.1 billion in sales in 2007 - its patent will expire in 2011.

Big Pharma's sales are expected to grow about 4.5% in 2008, according to S&P analyst Steven Silver, down from 6% growth last year. Shares of pharmaceutical companies trade an at average multiple of 13 times earnings, or about a 15% discount to the overall market.

That's where biotech drugs come in. First, the biotech sector promises to deliver the next generation of blockbusters. Genentech's Avastin and ImClone's Erbitux could both potentially treat dozens of different kinds of cancers, if the FDA approves their use as broadly as the companies want.

Second, biotech drugs still aren't subject to the same patent rules as traditional chemical-based drugs so generic drugmakers aren't yet a major threat. This means that biotech drugs could give drug companies predictable long-term revenues rather than relatively short-terms bursts of cash. Congress is still debating the rules on how to patent what is essentially a biological organism. According to research firm Global Insight, the FDA won't consider approving biological generics until Congress has provided guidelines.

Overall, biotech sales are expected to rise 13% this year, according to health-care research firm IMS Health. Shares of biotech companies advanced 10% in the first half of 2008, compared to a 13% fall for healthcare generally.

It's no surprise, then, that Big Pharma is willing to pay hefty premiums (often 30% or more) and take on a lot of risk to get into the market. It will ensure exclusive access for them to future drug discoveries - and replenish their own dry pipelines.

Why Genentech will say 'yes' to Roche

The next big thing in energy: Pond scum?
Related Articles