A flier strikes back

One traveler's tale of how he took an airline to court - and won. 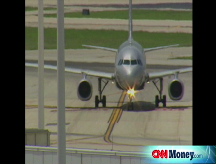 (Fortune Magazine) -- On Feb. 21, 2008, Mitchell Berns heard every flier's two least favorite words: weather related. Citing snow, Delta Airlines was canceling his flight from Las Vegas to New York City and rescheduling him for a redeye connecting in Boston. With 47% of all delays so far in 2008 caused by weather (up 5% from last year), most fliers can relate. And they know that normally this story ends with a bleary-eyed tale recounted the next day at the water cooler. Not this time. It ends in court, with our traveler $838 richer.

Berns, 55, is a securities litigator with Lane Sash & Larrabee in White Plains, N.Y. On that night he was flying home from a romantic getaway with his wife, who was pregnant with twins. Seeing that other airlines' planes were still departing as scheduled, Berns asked Delta to refund his ticket so that he could book one of those flights. They told him (politely, as he recalls) that weather-related cancellations or delays are not the airline's fault and do not come with a refund. Berns checked the National Weather Service report. It said snow that day was expected at five the next morning - hours after his flight was scheduled to land. He and several other passengers from his Delta flight easily booked a JetBlue flight departing at the same time. His tab: $938. He landed at J.F.K. on schedule.

Back at home, Berns did what any consumer with $15 (in New York City) and a working knowledge of English (or Spanish, in most states) can do: He filed a small-claims suit against Delta for $938. Delta did not show up to defend itself, so on June 12 he won a default judgment. When a legal analyst from the airline called him two weeks later to negotiate a payment, he declined an offer of frequent-flier miles ("Confederate currency," in his words) and made a counteroffer: If you pay me within two weeks, I'll knock $100 off. Delta agreed but asked for a confidentiality agreement. Berns said they couldn't have both, and Delta took the discount. (A Delta spokesperson did not respond to repeated requests for comment.)

"The lesson is, Don't let them bully you with bogus cancellations," says Berns. The whole thing took him about four hours, he recalls, resulting in earnings of less than half his hourly billing rate. "But I'd do it again," he says. "That's how good it felt."