Amid growing economic malaise, lowered expectations for earnings and sales are crushing stocks. 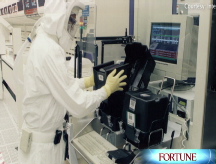 NEW YORK (Fortune) -- Tight-fisted consumers, budget-constrained IT departments and cash-hoarding phone companies are squeezing the tech sector, as an economic slowdown gains momentum in the United States and abroad.

The warning signals are coming through loud and clear on Wall Street. The Nasdaq is down 14% for the year, and off 8% since mid-August.

Nokia (NOK) is the latest tech giant to feel the pinch. Citing "weaker consumer confidence in multiple markets," the top mobile phone maker warned Friday that it will lose market share in the third quarter because it won't match competitors' price cuts. The news sent the stock down 10%, a new low for the year.

Other big names, including Texas Instruments (TXN, Fortune 500) and Corning (GLW, Fortune 500), which makes glass used for LCD screens, have hit multi-year lows after lowering their earnings forecasts. In short, a sector that last fall looked like an economic bright spot as the housing and credit markets turned south is now helping drag down the stock market.

Some of the pullbacks have been breath-taking. For example, telecom equipment maker Ciena (CIEN) slashed its fourth quarter sales outlook by 24% Thursday, citing a slowdown in spending by key U.S. customers, a list that includes AT&T (T, Fortune 500), Sprint and Verizon. Investors sliced 25% off Ciena's share price.

Gary Smith, Ciena's chief executive, was put on the defensive during the company's earnings call with analysts, who wondered if this isn't the start of a replay of the tech collapse of 2001. "I would not read more into this," said Smith in an interview Thursday after the analyst call. "It is not the tip of the iceberg."

It was the end of 18 quarters of rising revenues at Ciena however. And Smith says customers now appear to be taking a wait-and-see approach given the uncertain economy.

Looking around, it's not hard to spot other signs of strain. PC giant Dell (DELL, Fortune 500) missed analysts' profit expectations last week, and it offered no insight to how business was shaping up. The lack of guidance allowed investors to do their own guesswork, and the stock has since slumped 20%. On Friday, the Wall Street Journal reported that Dell is looking to cut costs by selling its factories to contract manufacturers.

The stock of chip designer Marvell (MRVL), which supplies smartphone vendors Apple (AAPL, Fortune 500) and Research in Motion (RIMM), has fallen 17% since company CEO Sehat Sutardja told analysts on an earnings call last week that "we need to be more sensitive to the market outlook at this point, especially in the next quarter until the economy turns back to normal."

Marvell later issued a statement denying it was changing its earnings guidance. But on Thursday shares continued to dive as Deutsche Bank analyst Arnab Chanda downgraded the stock to "neutral" from "buy" on concerns of weakening sales in Europe and Asia.

That's a refrain other analysts are echoing. "This has been a difficult environment in the U.S.," said RBC analyst Mark Sue. "And people are worried about China and Western Europe. These concerns are not conducive to tech suppliers."

The popped real estate bubble has taken a huge toll on the U.S. financial sector. Cash once used for technology upgrades has been redirected to help firm up balance sheets. Meanwhile,with European economies now in a seeming race with the United States to find a bottom, consumer spending on new products like cell phones is falling.

In a report last month, tech consulting firm Gartner predicted worldwide IT spending growth would slow this year to 8%, from 11% in 2007. Looking ahead to next year, Gartner estimates that the growth rate will fall to 6%.

Even the strong struggle

It's notable that some of the sector's stronger performers have said that their customers are cautioning about future spending.

Shares of Qualcomm (QCOM, Fortune 500) had surged 23% late last month after the company announced it had settled a two-year legal battle with rival Nokia. But the shares are now down 9%, and Qualcomm CEO Paul Jacobs said in an CNBC interview Wednesday that mobile phone buyers are delaying their new phone purchases.

Even Hewlett-Packard (HPQ, Fortune 500), which under CEO Mark Hurd has replaced Dell as the PC supplier Wall Street loves, is tempering expectations. At a Citi Technology conference Thursday, chief financial officer Cathie Lesjak told investors that the company doesn't expect to see a big revenue gain out of its newly-acquired EDS unit.

Instead, she emphasized the ample cost-saving opportunities. "Cost cutting is one of my favorite subjects," Lesjak told investors. "We have quite a bit more to do." She said the company plans to make deeper cost cuts across the company in 2009 than it has in the prior two years.