Playing the blame game on oil

A new report arguing that speculators are to blame for high prices is way off the mark, but that won't stop politicians from using it as "evidence." 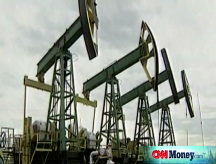 NEW YORK (Fortune) -- Any study that relies on a chart of Google searches for the term "oil speculation" to make the case that futures traders are responsible for yo-yoing crude prices should be greeted with a heavy dose of skepticism.

Yet as Congress settles in for another attempt at an energy bill, starting with an energy "summit," on Friday , you can expect the amusingly-flawed new report from hedge fund manager Michael Masters to be touted by lawmakers who want to limit futures trading in oil and other commodities - and scapegoat investors for high oil prices in the process.

As I've argued here before, oil speculators cannot materially affect prices if all they're doing is flipping futures contracts and not taking delivery of actual oil - i.e. hoarding what would otherwise be available to consumers.

Speculators who don't take delivery (and we know today's aren't because oil inventory numbers are going down and not up) have no more control over oil prices than traders in weather futures have over wind speeds. Their gains or losses come out of the hides of investors on the opposite side of their bets, not from the oil-consuming public. Mainstream economists generally agree with this line of thinking.(See, for example, this paper by UC Berkeley's Severin Borenstein.)

Yet Masters, an equity investor whose transportation-heavy portfolio has been snakebitten by high fuel costs, has already had two star turns as a witness in Congressional hearings. And as long as Washington pols look for someone to blame for high gasoline prices - thus deflecting the spotlight from themselves for failing to come up with a real energy policy - they're likely to keep trotting out Masters. But his new study only magnifies the problems with his argument. For instance:

"How can one explain a $50 spike in prices within a few months time followed by a $35 drop in prices just a few months later?" Masters writes. "Does supply and demand or a weak dollar really explain the roller coaster ride that oil prices have been on?"

Masters contends that the way to explain these huge price moves is by looking at investor flows into and out of commodity futures. There's just one problem: there have been similar price swings in commodities for which no futures market exists, like onions and iron ore.

Meanwhile, the supply and demand argument has never looked stronger. With so many consumers trading in their SUVs for buses and bikes, U.S. oil demand fell by 6% in June, according to the Energy Information Administration (EIA). And in a tight market, any shift in supply or demand is likely to have an outsized impact on price.

Talk about a straw man. I can't think of any expert who claimed that the run-up in oil prices was entirely due to the weak dollar. I bet Masters can't either.

"It is very difficult to believe that non-U.S. consumers were increasing their demand for oil in 2008."

In fact, non-U.S. oil consumption is on pace to rise 2% in 2008, according to an EIA report released on Sept. 9. Even with the drop-off in oil demand in the U.S., worldwide demand is forecasted to rise by 1%.

And then, there's the Google (GOOG, Fortune 500) argument.

"Generally, most institutional investors do not want adverse publicity. As Chart 5 shows, according to Google, the search term 'oil speculation,' which did not even register at the beginning of the year, hit a peak in the late May to mid-July timeframe. Clearly, the U.S. public was waking up to the issue. And the threat of Congressional action against excessive speculation was highly elevated during this time."

"Although institutional investors typically buy and hold investments for the long term, it is likely that a large number of index speculators were concerned enough by what was occurring in Washington to pull their money out of commodity index investments. Beginning on July 15th, index speculators led a mass stampede for the exits, pulling out approximately $39 billion from the S&P Goldman Sachs Commodity Index."

A more likely explanation is that investors simply exited when prices started to fall. But overlooking the obvious isn't even the biggest flaw in Masters' argument. It's what he buries in a footnote: "The Dow Jones-AIG commodity index did not experience outflows during this period. It actually experienced a nearly $7 billion inflow."

In other words, Masters wants us to believe that investors in one top commodity index pulled their money out due to political considerations while investors in the other were unconcerned about "adverse publicity."