The IBM sales force, then and now
View photos
How to succeed in sales 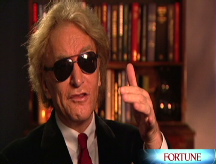 10 bizarre and daring feats of salesmanship
Fortune's "The Art of Selling" special report continues with a look at how legends mastered the sales pitch - and raked in the revenues.
View photos

(Fortune Magazine) -- Vivek Gupta barely waits for the driver to pull to a stop before jumping out of the back seat of the taxi. He strides toward a converted textile mill in south central Mumbai, which now houses the offices of Vodafone Essar, a subsidiary of the British-based wireless provider. Inside, it looks as if a procurement manager has ordered an entire catalog of Herman Miller's latest offerings, from angled cubicles to mushroom-shaped noise-canceling devices. Gupta exchanges pleasantries with the security guard and takes the stairs to the executive suite two at a time, greeting half-a-dozen people by name along the way. He stops before the office of Vodafone (VOD)'s chief technical officer, who looks up warmly. "Vivek!" the man says, springing to his feet. He claps Gupta on the back. "Sometimes even we are not sure if his name badge says 'Vodafone' or 'IBM.'"

Actually, his badge says 'IBM' - Gupta, 40, joined the company as a salesman five years ago. That said, it's safe to say that he knows more about Vodafone than many of the people who work here. Once or twice a week he travels from his home in Delhi to Vodafone's offices here in Mumbai (he makes the two-hour flight on Jet Airways economy, because the food's half-decent). He knows at the same time as the "superboss," as he calls Vodafone's managing director, if there's a switching problem at one of the company's cell towers. He can rattle off the number of seconds it takes for a call center rep to pull up a customer's record (11) and the revenue each new customer delivers to the company monthly ($7 to $9). He can do the same for his other two big telecom accounts, wireless leader Bharti Airtel and the No. 6 player, Idea Cellular.

Gupta is IBM (IBM, Fortune 500)'s top salesperson in the company's fastest-growing industry in the fastest-growing part of the world. An earnest man of medium height with a mustache that twitches when he smiles, which is often, he radiates quiet determination. "I don't remember a single deal in my career which I pursued and I lost," he says, digging in his pocket to check a text message, then silencing his gold Dolce & Gabbana RAZR. "It's just a question of time. If I play very smart, I can crack the nuts very quickly. If I don't play smart, it might take some time."

With overall revenues growing at about 6% annually, IBM is depending on emerging markets - where revenues are growing 14% a year - to continue powering its growth and its stock. It's up 15% this year, while the S&P 500 has lost 6%. That puts Gupta on the front lines of IBM's business. While one might think it would be easy to sell to wireless companies in a country where a population equivalent to New York City's is adding cellphone service every month, it's not. Though IBM first entered India in the 1930s, it left in the 1970s, along with most other foreign-owned companies, after the government enforced stringent foreign-ownership regulations. IBM returned in 1992, shortly after the government relaxed those laws in a movement known as "liberalization," and in 2002 the country became the centerpiece of IBM's emerging-markets strategy. But when Gupta joined five years ago, IBM was angling for a foothold in a market where relationships, trust, and blood trump everything (more than 70% of the market cap on the Mumbai exchange is family-controlled). When he first told Vodafone's "superboss" that he planned to take the job, the response wasn't exactly encouraging. "I don't do any business with IBM," he told Gupta, "and I don't intend to." His established relationships were working just fine.

Overcoming such resistance has always required IBM salespeople to be part teacher, part psychologist, part glad-hander. But Gupta's generation must also be part diplomat, part entrepreneur, part inventor. He's not just selling products from an IBM catalog; he's sifting through the company's vast research labs and inventing new combinations of goods and services tailored to each customer. He's not just selling you chips and mainframes; he's selling you the call center that your customers use and the software that automates your billing. He's selling you the security login that your employees need to enter the building and the intranet page that they see when they log on to their computers. He's selling you the engineer who will oversee your cellphone towers, and the researcher to dream up new services that you haven't even thought of yet.

The scope of what he sells is so great that, taken together, what Gupta's essentially selling is an idea. It's at once radically simple and just plain radical. He wants to convince you that IBM can run your business - your entire business, save for strategy and marketing - better than you can.

Vivek Gupta thrives on identifying discomfort. "You have to understand their pain points," he says of his customers. "And they're not going to spell them out." Several years ago he had a fruitless first meeting with a sales prospect at a wireless telecom. Though the prospect said he was perfectly happy with his current partners, Gupta asked if he could study the business anyway, no strings attached. First, he dropped by the company's switching center in Mumbai and chatted with the engineers on the floor. One mentioned that the microwave radios the company used to transmit call signals from one tower to the next weren't as reliable as he'd like. In his next conversation, Gupta mentioned he'd heard microwave radios were a problem. Figuring Gupta was in the know, this second engineer confided that the problem was serious: Six or seven times each week the network was effectively crashing. Gupta had found his pain point.

At the same time, he began compiling a dossier on his prospect: The man had two grown children, his wife taught public school, and they lived in Delhi. One evening when they were scheduled to go to the same industry event, Gupta offered to pick the guy up at home, knowing that, as is the custom, he would be invited in for tea. That night Gupta kept things light. But two months after the initial sales snub, he made a second call to the man, now a friendly acquaintance, explaining the problem with the microwave radios and offering a relatively inexpensive fix. A small contract for microwave radios led, within a year, to other deals worth $100 million.