Winemaking for fun and profit

Okay, maybe not profit. Or even fun. But showing everyone that you're a Business Genius With Impeccable Taste? Most definitely. A tour of California wine country, the type-A rich person's second-career heaven.

CEOs turned vintners
Former executives are flocking to the vineyards of Napa Valley, where they're vying to produce the next cult California red.
View photos
Napa Valley glory or bust 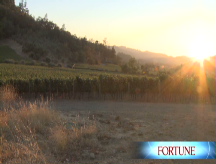 (Fortune Magazine) -- As the former president of Walt Disney Studios and Paramount Television, Rich Frank has a long list of blockbusters to his credit, from Cheers and Entertainment Tonight to Pretty Woman and The Lion King. He's a born marketer with a knack for convincing the public that we want what he's got. And now he's ready to reveal his latest masterpiece, several years in the making. At his office in Calistoga, Calif., he reaches behind his desk for a dark, unmarked bottle that must weigh five pounds or more. It's called Promise. He hands it over. "This," he says, "is going to be one of those cult wines."

That's quite a vow considering that few people - and no critics - have actually tasted the cabernet blend. The premier 2004 vintage, due for an October release, will sell for $250. It's a lot of money for a fifth of fermented grape juice, but Frank, 65, and co-creator Stephen McPherson, president of ABC Television, think it'll be remembered as a bargain - just as $75 for the inaugural vintage of Screaming Eagle, the most sought-after California cult wine, is cheap compared with $750 for the latest vintage.

Promise comes from a stunning hillside vineyard on Frank's personal estate in Rutherford, which yielded enough fruit for 140 cases. The pedigree and scarcity should excite serious oenophiles and investors, but none of them will be able to buy the wine, and that, Frank insists, will create a frenzy. "It's a marketing phenomenon. It's all promotion," he says. "It's how you do it."

Frank's Napa Valley winery, Frank Family Vineyards, produces nearly 50,000 cases a year of wines ranging from $30 chardonnay to $150 cabernet. But Frank sees an obvious void in his lineup at the very high end, which he's been eyeing longingly since a 1992 Screaming Eagle came out of nowhere and received a 99-point score from the world's most powerful wine critic, Robert Parker. The label - purchased in 2006 by an investment manager and a real estate mogul - has sold out every year since. The best chance for common folk to buy a bottle is in the after-market, for up to $2,000 online, or for $6,800 at DUO, a restaurant in the Four Seasons Maui, where rapper Jay-Z recently ordered two and left half of the second bottle on the table, to the wait staff's delight.

Each June, Frank organizes a blind tasting, attended by celebrities and Napa's premier owners, in which he lines up his best wine, a cabernet called Winston Hill, alongside the top boutiques, including Colgin, Insignia, Harlan Estates, and of course, Screaming Eagle. The results, by Frank's telling, are remarkably consistent. Winston Hill doesn't always win, but it inevitably places high - whereas Screaming Eagle has finished last more than once. While the triumph of a $150 bottle may not make for a feel-good underdog screenplay, Frank thinks it offers an important lesson: Quality is but one aspect of cult wine. The trick to producing the next Screaming Eagle, he figures, is deducing the rest of the elements in the formula and adding a twist - exactly the kind of thing he used to do with sitcoms and action flicks. "I'm not saying these aren't good wines," says Frank. "But they sell at that kind of money because they're marketed brilliantly and there's a very limited amount, so you can push the price up. Then the secondary market takes over."

Typically, a high-profile endorsement from Parker or Wine Spectator will provide the launch pad for a cult wine. But Frank, whose wines top out with ratings in the high 80s to low 90s - respectable, but not at $250 - doesn't consider it a necessary starting point. He prefers a more systematic brand of buzz generation. His means are great fruit, scarcity, and star power. He and McPherson, 44, have offered Promise to the Frank Family mailing list. Given the limited production, a sellout was pretty much a foregone conclusion. To be doubly sure - and because not all sellouts are created equal - the Promise duo lined up plenty of Hollywood celebrities to buy in. "We'll have a party. There'll be people covering it, saying, 'This star is drinking it, that star is drinking it,'" Frank says. "'And by the way, there's none available.'"

But that's getting ahead of things. Now that the juice is in the bottle, the next step toward cult status comes tomorrow night. That's when Frank and McPherson will offer a case of their newest creation at the annual Napa Valley Wine Auction, which is always the highlight of wine country's social and business calendar. It's a risky strategy. If Promise sells at an unexpected price, the crowd will begin chattering, the media will buzz, and anticipation will build. But if it lands with a thud, it could disappear into a sea of pricey wine; you never get a second chance at a first vintage. Not that Frank is worried. Suffice it to say he's got the whole auction formula figured out too.

Frank may be one of the most colorful and candid figures in Napa, but as an immigrant to the wine business trying to remake himself, he's hardly unique. The industry is thick with second-timers, many of whom started with a vacation home and wound up dumping a fortune into planting grapes and building a winery. This class of "oentrepreneurs" makes up a small fraction of total wine production, but it's definitely overrepresented on the top shelf.

Frank got into the business in the early '90s when he and Koerner Rombauer, another transplant - from commercial aviation - and owner of Rombauer Vineyards, purchased Kornell Champagne Cellars for an undisclosed amount. By comparison, McPherson got in cheap. His wife made him agree to pursue his passion for wine as a way to offset the stresses of his day job (hence: Promise), so he asked Frank for help. "I saw two interesting ways to get into the wine business. One is at the small-artisan level, and the other is to be Constellation Brands," says McPherson, referring to the $5 billion conglomerate.

Truth be told, there is no easy or obviously profitable route into wine, at least not in Napa. Going big brings a morass of distributor and retailer relationships, restrictions on interstate shipping, vulnerability to recessions, and so on. In the middle, selling mostly direct to consumers out of a tasting room as Frank does, isn't a lot better. "I asked my financial guy, 'When am I going to start seeing the money?'" Frank says. "He said, 'Three years after you die.'" And the boutiques are basically a really expensive hobby. Startup costs for land, equipment, and inventory run to the millions. Add a gleaming winery, and it's tens of millions. It takes three years from planting until a vintage is ready. And then what? Selling 400 cases at $200 a bottle grosses less than $1 million. The good news is that as long as bottles of first-growth bordeaux are selling for $1,200 and up, there's the appearance of headroom.

So they head to Napa in search of the magic in the Rutherford dust. And more come every day. A recent survey conducted by Silicon Valley Bank - yes, it has a winery lending business - claims that nearly half of Napa's vineyards will change hands in the next decade. The buyers will arrive with perspectives formed by previous successes. Frank, for example, compares tasting a barrel sample to viewing a rough cut of a film. But how the newcomers fare depends on their ability to fit into a rather peculiar place.

Despite its undeniable beauty and status as a gastronomic mecca, Napa Valley - pop. 124,000; about an hour's drive north of San Francisco - is basically one superexpensive small town defined by two roads and overrun by traveling bachelorette parties. The traffic is abhorrent.

And just as there's something about the soil that ensures a great vintage, there must be something in the water that drives people batty. Everyone knows who's sleeping with whom. There are a few supermarkets, a couple of gyms, and no boundaries between personal and professional lives. It's cliquey. There's high-profile family infighting (the Mondavis, the Schramsbergs) and more than a touch of sanctimony. People here like to talk about living close to the land and being part of a farming community even while relying on Mexican laborers to tend the pristine vineyards.

And the pace. It's slow. Oh, yeah, and all that alcohol. According to the Napa Valley Register's DUI log, there were 160 convictions in July and August, 32 with a blood alcohol content above .20. The kids party too. According to a recent survey, 46% of California teenagers have had a drink in the past month. In Napa Valley, it's 59%.

So why pay $400,000 an acre to live in a place and compete in such a small industry - total U.S. wine sales were about $30 billion last year; Intel's were $38 billion - where, as the cliché goes, the best way to make a small fortune is to start with a large one? The usual answer is, "I love great wine." But that doesn't explain much. Clearly there are ulterior motives. Maybe because after you buy a really big boat, a Napa winery makes a good return on ego. Some come to establish a legacy or secure entrée into the cultural elite. Others need a picturesque soft landing between high-pressure business - sales, say, or money management, or even engineering - and the mind-numbing glide of retirement. Life here also provides ample downtime for Little League. Wine country has an appealing take on commerce. In a first career, the phrase "trade secrets" evokes corporate espionage. Here, it's the act of strolling down to the coffee shop to swap stories.