Don't bet on a bailout payday

The costs of the Wall Street rescue plan are only starting to be tallied.

The crisis: A timeline
A shocking series of events that forever changed the financial markets.
View photos
The roller-coaster economy 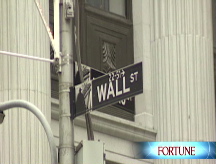 NEW YORK (Fortune) -- Bill Gross says taxpayers could make money on the financial-sector rescue package moving in fits and starts through Congress. He doesn't have much company, though.

The chief investment officer at giant bond manager Pimco wrote this week in the Washington Post that the $700 billion plan proposed by Treasury Secretary Henry Paulson "is anything but" a bailout of Wall Street.

Gross argues that by paying 65 cents on the dollar to relieve bloated banking and brokerage firms of around $1 trillion worth of tarnished loans and securities, most tied to the crumbling real estate market, the government could earn 7%-8% annually.

"This is a political animal now," said David Kotok, chief investment officer at Cumberland Advisors in Vineland, N.J. As a result, he says, any statement in support of the plan is immediately suspect.

Who knows what it's worth?

The same could be said for any attempt at valuation.

In fact, Fed chief Ben Bernanke conceded as much in Congressional testimony this week, with worrisome implications for the prospects of taxpayers' recovery.

On the one hand, Bernanke said that the government would aim to pay above the fire-sale prices now available in the market - Merrill Lynch recently sold a package of debt at 22 cents on the dollar - and closer to what he called the hold-to-maturity price implied by the cash flow performance of the underlying loans.

Bernanke's statement suggests the government might end up paying around what Gross suggests. Problem is, the Fed chairman admitted, "nobody knows what the true hold-to-maturity price is."

Indeed, there's plenty of history that illustrates the pitfalls of dealing with assets like the mortgage-backed securities at the heart of today's crisis.

Janet Tavakoli, a financial industry consultant in Chicago and author of Structured Finance & Collateralized Debt Obligations, cites the experience of Japan, where banks found their balance sheets stuffed with bad loans after a stock-and-property bubble collapsed in 1989. U.S. private equity firms and other bidders offered to take on some of the distressed loans at low prices, but the banks declined to sell, creating a "stalemate that lasted for years."

Ellington's suspension came just six months after the fund made a $2.9 billion purchase of distressed loans from Fremont General, a California subprime lender that regulators forced out of the business. The fact that even a trader as experienced as Vranos could end up buying "a pig in a poke," as Tavakoli put it, points out the enormous level of risk in these assets.

Wall Street's "malicious mischief" in constructing confusing or ambiguous structures for the securities it now wants to unload will confound the Treasury's efforts to assess them, Tavakoli adds. "The benefits of this package have been overrepresented to an unconscionable degree," she said.

Still another difficulty lies in the sweeping nature of the rescue package, says Raghuram G. Rajan, a finance professor at the University of Chicago Graduate School of Business. He says it seems clear that it will be necessary to recapitalize the banking system and to remove troubled loans from banks' balance sheets.

But the Paulson/Bernanke plan appears to try to do both and that "creates some mismatches in terms of motives," Rajan said.

By buying up the bad debt the Treasury will make it easier for banks to lend again, a clear public good. On the other hand, by paying above-market rates, Treasury allows banks to avoid writedowns and effectively gives them capital they'd otherwise have to raise -and subsidizes shareholders who in past financial rescues have seen their ownership stakes diluted.

Rajan adds that, while it's understandable that Congress wants to get a bill passed, he believes it's important that the effects of the plan be reviewed early and often. "They've bought themselves some time by presenting a plan," he said of the government. But, he added, "What is the fallback position?"

Rajan says he's not eager to see it come to this, but "you have to have a plan B and a plan C in case what you're doing isn't working."

For his part, Kotok of Cumberland Advisors stresses that money is only the first ingredient in a successful intervention. The government will have to provide greater transparency on its decision making process - why, for instance, was taxpayer money spent on behalf of Bear Stearns and not Lehman Brothers - and much more clarity on how the bailout will be administered. And the feds will need to show Americans their funds aren't being wasted in support of multimillionaire CEO types.

Until that happens, he says, nervous credit and stock markets "are the new normal."

The bailout: What's at stake