How to deliver bad financial news

Announcing lousy results is never a day at the beach. Whether you're addressing the board or employees, here's how to do it right. 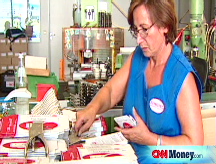 (Fortune) -- Dear Annie: I am second-in-command at a small division of a huge company. We always have a quarterly meeting with employees, and another with the board of directors, to talk about our financial results for the preceding three months. In the past it has fallen to my boss to make these kinds of announcements but, this time around, he will be traveling in China when the numbers come out and has alerted me that I will be doing the honors.

I know the numbers are going to be terrible (for the first time in several years) and, if the question comes up, I'll have to acknowledge that there may be layoffs ahead. Do you have any suggestions for how to soften the blow? Should I open with something humorous, or play it straight? --Don't Shoot the Messenger

Dear Messenger: How convenient for your boss! But think of this as good practice, since every senior executive has to drop a bombshell at some time or other; it goes with the territory.

You're probably going to be nervous, especially when you have to speak to the board. Starting with a joke might make you feel better, but don't do it.

"Forget about trying to lighten things up. It's not appropriate," says Anett Grant, president of a Minneapolis-based coaching firm called Executive Speaking Inc. (www.ExecutiveSpeaking.net). "Everybody is very serious these days. They just want you to get to the point."

Also ditch any meteorological metaphors you may have in mind, advises Grant, who has spent the past 29 years advising managers at companies like GE, PepsiCo, Pfizer, and Verizon on how to address the troops without turning them into an angry mob (or a firing squad).

"When people are stressed, they have a very low tolerance for clichés like 'the perfect storm' or any phrase with 'headwinds' or 'tailwinds,' which have become a popular form of spin lately," she says. Unless you're talking about the effects of Hurricane Ike, leave the weather out of it.

To get the bad news across effectively and with a minimum of antagonism from your audience, stick with "the three C's," Grant advises: "Be calm. Be concise. And be clear." Some tips about each:

Make sure your voice goes down at the end of each sentence. "If you raise your voice at the ends of sentences, you sound tentative, as if you were seeking approval or agreement," Grant observes. "Women have more of a tendency to end on an 'up' inflection, but ending 'down' is an issue for men too, and for executives from other cultures, not just American."

To help you stay cool when all eyes are upon you, Grant recommends rehearsing your talk with a friend, partner, or spouse until you have it down cold.

Concise. "Being concise means stating the facts -- no big preambles, no beating around the bush, no rambling, no drifting off on tangents to talk about things that may be somewhat relevant but not critical," says Grant.

To make sure your talk is concise, she says, draw up a list of the four or five most crucial pieces of information you want to convey, and build your talk around those.

Your presentation to the board should differ somewhat from the speech you make to employees, Grant notes.

"The board wants to hear about how these negative numbers will affect strategy, including market position and any possible restructuring, so focus your remarks on those aspects when you speak to them," she says. "Employees are more likely to want to hear how day-to-day operations will be affected, including cost-cutting measures and any other information you can give that relates directly to how they do their jobs."

Clear. To make sure that you're conveying the bad news clearly, Grant suggests quizzing your pal or spouse after you've practiced your speech at home.

"Don't ask, 'How was I?,'" she says. "Instead, be specific. What message did the other person get from what you said? What did he or she think was the main point? Was that the point you most wanted to make? If your friend or partner 'gets' it, your employees and board members will too."

Whatever you do, stay away from jargon and buzzwords. Grant says she worked with one company whose marketing people told her they had "achieved structural integrity." When she pressed them for a definition, they said it meant they had established a solid relationship with a major commercial bank. So why not say that?

"Phrases like 'achieving structural integrity' are meaningless and just annoy people," Grant observes. She adds that this is particularly true when you're speaking to the board: "At the very senior levels of companies, power is based on trust. Hiding behind jargon and trying to sound clever will mark you out as a junior."

Following the 3 C's "will give your listeners the impression of trustworthiness, which is what people are looking for now, at every level of the company," says Grant. "Everyone is well aware that things are rocky right now and probably will be for a while. What they need to know is, can they trust you to lead intelligently in the future?"

Grant warns that the board may be a particularly tough audience, so study your facts inside out and deliver them in plain English: "If your board thinks you are being anything but straightforward, watch out for the piranhas." Good luck.

Readers, what do you say? Ever had to deliver bad news to a stressed-out audience? Or have you been on the receiving end? Got any suggestions for how to do it (or how not to)? Post your thoughts on the Ask Annie blog.