Financial firms like WaMu piled on debt -- now the bill has come due, for Wall Street and the entire economy.

Bank failure: What next? 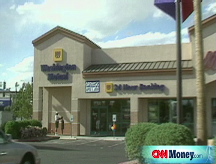 NEW YORK (Fortune) -- Washington Mutual failed Thursday in the biggest-ever U.S. bank failure - the latest twist in a month-long shakeout that has seen five major financial institutions either go bust or get nationalized.

But as stunning as September's financial sector meltdown has been, the crisis has its roots in a bad habit that Americans have been getting scolded about for years: the free-spending ways that have left consumers and financial institutions alike struggling under a huge debt burden.

The dangers of leverage in a market where asset prices are falling have been well established by this month's collapse of WaMu (WM, Fortune 500) and Lehman Brothers, and the federal rescues of Fannie Mae (FNM, Fortune 500), Freddie Mac (FRE, Fortune 500) and AIG. All five firms had borrowed heavily to support mortgage portfolios whose value is declining by the day as the housing bubble of earlier this decade deflates. In response, firms from Goldman Sachs (GS, Fortune 500) to General Electric have pledged to raise capital and reduce borrowings.

What's remarkable, however, is the degree to which the U.S. banking system as a whole suffers from the overleverage problem - which helps to explain why banks such as Wachovia (WB, Fortune 500), off 28% in trading Friday, and Morgan Stanley (MS, Fortune 500) continue to come under pressure.

Merrill Lynch commodities strategist Francisco Blanch writes in a report Thursday that the ratio of total loans to deposits in the U.S. hit 3.5 to 1 last year. That's more than double the ratio found in the second most highly leveraged banking system, Russia's, and more than triple the ratios in the U.K., Germany and Japan.

Where did the money go?

For years, the banks have been borrowing heavily relative to their deposit bases - and pouring the proceeds of those loans into the housing markets, now in free fall.

Data assembled by Northern Trust economist Asha Bangalore shows that the proportion of mortgage-related assets to total assets at U.S. commercial banks - a measure of exposure to the real estate markets - jumped as high as 63% in 2006 from 48% a decade earlier.

Leverage and real estate exposure were prominent in the collapse of WaMu, the Seattle thrift that was seized Thursday evening by regulators and sold for just $1.9 billion to JPMorgan Chase. During the housing boom earlier this decade, WaMu was a big originator of adjustable-rate mortgages that are now going into default at a rapid pace. The company posted losses totaling more than $6 billion over the past three quarters as it increased reserves for soaring loan losses.

In his report, Blanch points out the U.S. leverage issues and suggests the credit crunch and the energy crisis grew out of the same market misfunction, which he says led to an oversupply of housing and an underinvestment in energy production. He notes that rising consumer spending in the U.S. has helped to sop up the savings of workers in China and other developing nations who were furiously socking away their earnings.

"China's integration into the global economy, coupled with an undervalued exchange rate and a high propensity to save, created a major savings glut during the last 10 years," writes Blanch. "The excess Asian savings found their way into the Anglo-Saxon housing sector, in part because many emerging markets struggled to deploy the money at home but also because attractive investment opportunities in the energy sector were hard to find."

Once in the U.S., the redeployed Chinese savings allowed a multi-decade shopping spree to continue. U.S. consumers bought houses, cars and goods at a record clip earlier this decade, pushing consumer spending to a record 70% of economic activity in recent years. Meanwhile, Americans stopped saving altogether - the personal savings rate was negative for some years during the housing bubble, showing that U.S. consumers were outspending their income.

But this shopping spree - Americans have been spending some $700 billion annually more than they produce, borrowing the difference from overseas creditors - couldn't last forever. Once house prices stopped rising, consumers pulled back and the U.S. economy slowed. Nonfarm payrolls have now shrunk in eight consecutive months, and banks that only a few years ago were showing record profits are now bleeding red ink.

"It has been known for a long time that the path the U.S. economy was following would be unsustainable" writes economist Jim Griffin at ING Investment Weekly. "It would not, could not, be possible to go along indefinitely by relying on other people's saving."

Now, with the financial sector under enormous stress and the dollar giving back much of the gains it made in a rally that started in July, the question is how U.S. creditors like China will react. The prospect that foreign governments could flee the dollar has been bandied about for years. And though there is no sign a flight from the dollar is actually happening, that doesn't make figuring out where to go from here any easier.

"Our creditors can't vote in our elections," Griffin writes, "but they cast a long shadow in our markets."