National City's line in the sand

The Cleveland bank may have the resources to withstand the onslaught that brought down WaMu and Wachovia. 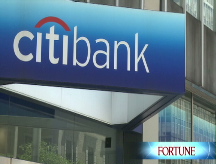 NEW YORK (Fortune) -- National City insists it isn't about to follow in the footsteps of Wachovia and Washington Mutual. But the events of the past week suggest the bank's depositors are the ones who will make that decision.

National City (NCC, Fortune 500) shares plunged as much as 67% Monday, falling as low as $1.25 each, as investors bet the Cleveland-based lender will be the next financial firm to fail.

The selloff came just hours after Wachovia (WB, Fortune 500) sold its banking assets to Citi (C, Fortune 500) in a deal backstopped by the Federal Deposit Insurance Corp., and less than a week after Washington Mutual (WM, Fortune 500) failed and had some of its assets sold to JPMorgan Chase (JPM, Fortune 500).

Those institutions were the biggest players in the market for funky adjustable rate mortgages. National City, to be sure, has had its share of problems, too. But the bank stresses that there is no reason for investors or depositors to fear for its safety. It has much less exposure to aggressive mortgages and rapidly deflating housing markets in California and Florida, for instance, than WaMu and Wachovia.

But the demise of WaMu and Wachovia shows that in the current panic, a bank's executives aren't completely in control of their fates. At WaMu, depositors withdrew billions of dollars after Lehman Brothers' collapse two weeks ago sent the financial markets into a panic, forcing the Office of Thrift Supervision to seize the thrift and put it into FDIC receivership.

So far, there's no sign National City has had any problems keeping its deposits. St. Pierre wrote Friday that through the end of the second quarter in June, there was "no evidence of flight at NCC, with the company having already made plenty of negative headlines."

St. Pierre was referring to the company's April barrage of bad news. National City was reportedly seeking a buyer, but ended up selling $7 billion worth of common and preferred stock to a group led by New York's Corsair Capital. National City also took a $1.4 billion loan loss provision and slashed its quarterly dividend to a penny from 21 cents.

But from April's bad headlines come September's strength, Wagner Amen says. She says National City's tier one capital ratio - a measure of the cushion against future losses that's watched by regulators - stands at 11.1%, a level Wagner Amen describes as the highest among large banks. She says Wachovia would have had to raise $19 billion in new capital to match National City's capitalization.

Wagner Amen adds that National City's capital, funding and liquidity "remain ample," and that the bank is operating "from a position of strength." She says National City has a large core deposit base of 4 million household customers, and that base gives the bank the strength to say that it has "no plan, intention or need to raise new capital" or otherwise take unusual action.

One factor that weighs in National City's favor is the modest rate it's currently paying on 12-month certificates of deposits. The bank is offering 3% for one-year CDs - compared with a recent 4.1% at Wachovia and 4.9% at WaMu.

The higher rates at Wachovia and WaMu suggested the firms were in desperate need of funding, and were willing to pay above-market rates to lure in deposits. High short-term CD rates are apt to bring in business from the deposit brokers who take large sums for affluent clients and invest them at various institutions. Those funds can help a bank get access to funding when times are good, but are apt to flee at the first sign of trouble.

"Large depositors have sought higher yields at companies like WaMu and Wachovia, which needed the liquidity but had trouble attracting it without paying up," says bank analyst Gary Townsend, who runs Hill-Townsend Capital in Chevy Chase, Md. "The FDIC insurance limit is obviously far short of levels that would inhibit large deposits from fleeing elsewhere when the risk to capital rises above a low threshold."

The September bloodbath - six financial firms have failed or been taken over by the government in the U.S. alone - suggests that many of the moves being taken by policymakers are having little, if any, effect in slowing the collapse of the credit bubble that took shape in the late 1990s and the earlier part of this decade.

Townsend, for one, says the decision to prohibit short-selling in financial shares left portfolio managers with two options: go long, or get into cash. Given the ferocious unwind in the credit markets and the poor track record over the past year of those who made big bets on a recovery in the financial sector, it's no surprise that managers everywhere have chosen cash.

"The regulators have been too clever by half, or maybe more," says Townsend. Without the option of shorting stocks, he adds, "What are you supposed to do to manage risk?"