You thought the Aeron was cool? Wait till you take a seat on Herman Miller's new Embody chair.

The techie's new throne
The successor to Herman Miller's iconic Aeron chair, the Embody is ergonomic - and cool.
View photos
$1,600 for office comfort 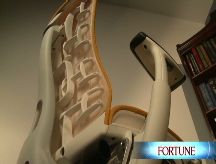 (Fortune Magazine) -- The latest object of technophile lust is a sight to behold, with an exoskeleton climbing up its singular back and enough levers and knobs to land a Cessna. Herman Miller's much-anticipated office chair, the Embody (list price: $1,595), is finally rolling out this month. Six years and millions of dollars in the making, the Embody is ready to one-up its iconic predecessor, the Aeron, which in 1994 revolutionized the act of sitting down.

That is no easy task. The Aeron brilliantly anticipated the Digital Age by allowing workaholics to spend endless hours lashed to their computer screens without developing bedsores. With a mesh suspension system that conformed to a user's body shape, the Aeron generated more than $1.5 billion in revenue and looked so cool that it's still being used by Tina Fey on the sitcom 30 Rock and resides in the permanent collection of New York's Museum of Modern Art.

Though Herman Miller offers a dramatic story about how Embody began - the late, legendary Aeron designer Bill Stumpf told the company, "I think I've got one more in me" - the company really had no choice. Today's $2 billion U.S. office-chair market is crammed with competitors such as Steelcase (a chair called Leap) and Knoll (Life).

So Herman Miller decided, in the words of exec Don Goeman, to grow a new chair. "That's a pure notion of high aspiration in embarking on a journey of learning and discovery," he explains. That's how chair people talk. In 2002, Stumpf and his studio partner Jeff Weber embarked; they created a prototype just before Stumpf died in 2006 at age 70.

Herman Miller (MLHR) rhapsodizes about the Embody's ergonomics, but the appeal is really the technology. Take the four-layer seat. Flip the chair upside down and you'll see black elastic bands that provide universal suspension. A second layer of plastic coils provides extra support, and a third layer of plastic hexagons moves independently as users shift their weight. Finally, the seat cover allows air to pass through, cooling the user's body.

Then there's the look. That back is primarily functional. But rather than hide it, Herman Miller prefers to play it up. "We like to say that form and function are one," says Weber.

The materials in the Embody could be the focus of an entire graduate seminar. The company says the chair uses nothing that could pose a health or environmental risk during manufacturing, customer use, or final disposal. (The Embody may be nontoxic, but rumors that you can actually eat it are greatly exaggerated.)

Herman Miller had some big hits even before the Aeron, of course. Bobby Fischer insisted on an Eames chair during his chess match against Boris Spassky. Pope John Paul II used two custom Eameses during his trips abroad.

"We think we've grown the greatest chair yet," Goeman says. But sometime in the first half of next year, Knoll plans to come out with its own model, which will offer "a new level of comfort and unrestrained movement" - no doubt sending Herman Miller back to the drawing board to grow the greatest chair ever. Again.