When even a profitable fund closes, that's a sign there's trouble ahead. 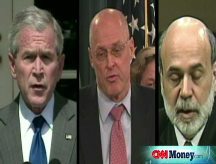 NEW YORK (Fortune) -- The domino nature of the looming hedge fund crisis is neatly illustrated by the troubles of a high-flying New York fund with a niche that was supposed to be recession proof.

Laurus Capital Management, which manages $1.6 billion and has posted nearly 16% annual returns since 2001, is shuttering an $800 million portfolio after its largest investor said it would withdraw $300 million.

While investors are fleeing capital markets globally as both credit and equity investments falter, Laurus' strategy of making private investments in public entities, known as PIPEs, was thought to be largely immune from this cycle. The fund buys bonds and warrants convertible into equity in small companies whose stocks trade for pennies a share. In a credit crunch, a PIPEs fund should be able to find attractive would-be debtors in need of capital.

And to a point, the PIPEs strategy has worked, with Laurus returning about 2.7% through the end of August while hedge funds generally have shown losses this year.

The problem is that big institutional investors are growing unsure about hedge funds in general, and the big investor in the Laurus fund, the alternative strategies unit of Northwestern Mutual's Russell Investments, has suffered losses in its hedge fund portfolio.

Russell's plan to pull out its stake will force Laurus, run by a pair of Ukranian immigrant brothers, Eugene and David Grin, to make difficult decisions. In an environment where money is tight, liquidating a portfolio of stakes in small companies won't be easy. According to industry newsletter Hedge Fund Alert, which first reported Russell's departure, Laurus might have a hard time unwinding its positions quickly without sustaining sharp losses.

Laurus is suspending redemptions for now to ensure that it isn't forced into a fire sale of assets, with the hope that all investors will eventually get their capital returned, said fund investor relations executive Dennis Pollack.

"We don't have $300 million in cash on hand," said Pollack, "And PIPEs are not the most liquid [instrument] in the market. But we hired a firm to liquidate the portfolio and as we raise cash, it will be returned in an orderly fashion."

Pollack added: "It's really a shame since we were seeing some really good companies come to us for financing after their banks turned them down."

The Russell unit invests in hedge funds on behalf of pensions, endowments and wealthy individuals. It saw its $200 million investment in SageCrest LLC, a Greenwich, Conn.-based real estate lending fund, jeopardized last year when that fund wrote down 55% of its portfolio. In August, two of SageCrest's funds filed for bankruptcy protection.

A call to Russell was not returned.

Last year, the Russell unit posted a 4.8% loss and received a wave of redemption requests. In turn, this led to the decision to shut two of its largest funds, with a combined $5.2 billion under management.

As for the Laurus fund, it's rare that a fund with more than $200 million in assets or a long operating history has so much of its assets coming from one investor.

Pollack told Fortune.com that the reason Russell became such a disproportionately large percentage of Laurus is that it kept its stake in the fund while many investors chose to invest in a new Laurus offering, the Valens fund, which remains open.