Monitoring the staff pays off 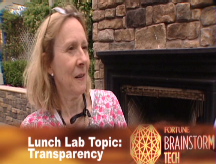 ERIE, COLO. (Fortune Small Business) -- Ryan Elmore used to trust that his employees were hard at work after he left his neighborhood restaurant in Erie, Colo. Then, 18 months ago, he decided to spy on them.

Elmore, 30, installed networked cameras on the premises and started using an online service that let him view the action at his eatery. The video was highly revealing. The restaurant manager on duty went home minutes after Elmore left. Servers sat at tables, sent text messages on their cellphones, and gave free meals to friends. Cooks took multiple cigarette breaks each hour and cut corners making his signature fettuccine Alfredo.

"I couldn't believe it," says Elmore. "You may trust your employees, but you don't know what happens when you walk out that door."

Now the 20 workers at Elmore's restaurant, Pepper Jack's Neighborhood Grill, know the boss is watching, even if he is at home. Elmore can log in online, view a receipt, and call up the video of that transaction. He can see whether employees cleaned the restaurant when they said they would. He knows whether they're smiling at customers. And if a customer's order arrives at the table late or if employees are helping themselves to meals, Elmore sees it.

Small businesses like Pepper Jack's are saying goodbye to VCR-based surveillance systems and the hours of clunky tapes that went with them. A new generation of online video systems is being used not just to catch thieves but also to identify problems within the company. The cameras and video software are adjusted and upgraded by the service providers. You simply pay a monthly fee for access to video of your business. Of course, you also risk a backlash from your employees. But for owners like Elmore, the savings justify the costs.

A typical installation from Envysion, an online surveillance company based in Louisville, Colo., costs $850. That gets you four cameras, which the company can install. Envysion's monthly fee is $160, which pays for unlimited access to live and archived video. You can also set up alerts to receive e-mail videoclips from a given time of day or from a particular transaction. You can search for clips based on location, date, time, and whether there is any motion in an area of the camera's vision. You can also share clips with designated managers.

Envysion's software even lets users build a library of training videos, such as best practices for store openings and closings.

"It's like your own private, internal YouTube," says Matt Steinfort, CEO of Envysion. The company launched only a year ago but already has cameras installed in 1,000 stores and restaurants.

DTT Surveillance, based in Los Angeles, offers similar technology with no installation fee and a monthly service charge of $150 to $349, depending on the number of cameras. If you don't have time to review the video yourself, DTT offers a "smart audit" option. For an extra $99 a month, DTT's employees will scan all your video to ensure that employees are complying with an owner's rules - such as wearing hairnets or working overtime.

DTT president Sam Naficy boasts that his technology helped one fast-food franchise avoid a frivolous lawsuit. The cameras caught a woman deliberately spilling her own soda so that she could slip and fall in the puddle. Presented with the video, the would-be litigant backed down.

Elmore found his surveillance system by accident. He bought two local pizza franchises whose former owner had installed Envysion, and decided to test it out at Pepper Jack's. The technology paid off at once. Watching video remotely, Elmore and his business partner and wife, Janel, noticed plenty of times when Pepper Jack's was overstaffed. They adjusted employee schedules accordingly and cut labor costs by 5%, or about $50,000 a year.

Food costs dropped 3% because servers stopped giving friends free meals - something the Elmores now identify immediately by reviewing voided receipts and watching the accompanying videos. In two years the restaurant's losses from voided tickets dropped from $168 a day to $50 a day.

Pepper Jack's profits grew 43% last year, by $60,000. In a year when rising food and fuel prices have crippled neighboring restaurants, Elmore was able to cut his operating costs by $100,000 - all for an annual investment of $1,920. "The technology has more than paid for itself," he says.

Elmore admits that the remote snooping made him feel guilty at first. But when he saw the results, his concerns went out the window. "As an operator, I want to know where every dollar is going," he says. "This is my life. Everything I have is riding on this." And by monitoring all three of their restaurants remotely, Elmore and Janel gain priceless free time.

They aren't the only ones. For years Texas auto body shop owner Danny Sullivan fretted about working too many hours at his Kingwood shop, Sullivan's Advanced Paint & Body, and not seeking out enough new business. But he also didn't feel confident leaving the shop in the hands of his 15 employees. Sullivan started using video technology from Dallas-based Westec Intelligent Surveillance. He paid $300 to install eight cameras in his shop, plus $300 per month to log on and view video anytime.

In just three months Sullivan added $75,000 in new business - because he was able to visit insurance companies and persuade them to refer clients to him. Meanwhile, his workers know they're on camera and behave as if he hasn't left. "My ball and chain is removed," Sullivan says. "It has proven priceless."

Before unleashing your inner spy, consider these caveats. First, it's best to make silent movies. Record audio with your video, and you may be in violation of state wiretapping laws. Think carefully about where cameras will go, avoiding places where someone would reasonably expect privacy - such as changing rooms or bathrooms. Hang signs in public areas warning customers that they may be videotaped. Tell employees that they're being recorded and why, and make sure that they acknowledge the disclosure in writing.

"The more upfront you can be, the more it helps everyone's expectations," says employment attorney Kim Moore, a partner at Dallas law firm Strasburger & Price.

You should also be wary about which employees have access to the video. Hollywood producer Brad Wyman spent months researching surveillance video for his 2007 movie Look, which is told through in-store cameras. At one mall he found teenage workers in charge of surveillance who spent most of their time recording videos of women's breasts.

"It was really eye-opening," Wyman says.

Even in the most secure situations, becoming Big Brother can backfire.

"Most employees do not like to be monitored, so it may cause some resentment," says Lawrence J. Gartner, an employment attorney and partner at the Los Angeles law firm Ballard Spahr Andrews & Ingersoll. That resentment could spur workers to unionize, Gartner says.

Chances are your workers are already familiar with remote monitoring. In 1997, 35% of U.S. businesses kept tabs on their employees by monitoring their e-mail, Internet, or phone connections, according to the American Management Association. A decade later that figure had risen to 80%.

But it's unclear how many workers object to video monitoring. At least one Pepper Jack's employee quit his job on the grounds that he didn't like being watched. It's hard to say how that affected the rest of the staff, since there's so much turnover in the restaurant industry; 96% of workers leave their job within the first year anyway.

Elmore says that Envysion has also helped him identify and retain his best workers. At one point he noticed the kitchen staff was cleaning more often than usual. He asked about it and discovered that the kitchen manager had created a contest to motivate the workers. Elmore now rewards that manager by paying for her and her family to eat out at a restaurant of their choice every week.

"Anyone can talk a good game," Elmore says. "Envysion helps us find out who doesn't care, and who really wants to be here."

Happy customers - and no service staff

Steeled for 500% growth
To write a note to the editor about this article, click here.