Workers at the automaker's new U.S. headquarters need to clear their desk at the end of the day. 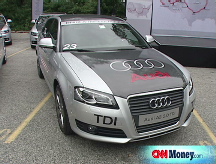 NEW YORK (Fortune) -- When Audi opened its new U.S. headquarters in Herndon, Va. this summer, the German automaker's sleek new office was immaculate - and executive vice president Johan de Nysschen wants to keep it that way. De Nysschen, who hails from South Africa, issued a dictum to the 100 employees who work at the site: At the end of the day, clear your desk of nearly everything. "We want to create a sophisticated atmosphere," he says. "It's conducive towards organization."

Audi isn't the only company with a clean desk policy. Fashion house Calvin Klein was notorious a few years ago for enforcing its minimalist aesthetic via workplace rules, which forbid the display of colored flowers - white ones were kosher - and photographs or awards. GE (GE, Fortune 500) also mandates neatness (but permits non-uniform flora), and UPS (UPS, Fortune 500) founder Jim Casey implemented a clean desk rule at his company over one hundred years ago.

Such policies would seem unnecessary in the electronic age, when memos and reports are transmitted digitally. But the advent of e-mail has, ironically, made offices less paperless: U.S. consumption of office paper has increased by about 10% since 2004, compared to 4.6% from 1992 to 1996.

One reason to keep it clean: information theft. Studies estimate that the average desk jockey now piles about 36 hours of work on his workspace at any one time, amplifying the threat of loose documents. More places for data storage means more passwords, which typically means a smattering of post-it notes that are labeled, unsubtly, "Passwords."

De Nysschen says his clean desk policy is intended to make a visual impression - and to ensure that the "home of Audi" is presentable to visitors. "It's in the interest of a consumer-facing business to be neat," says Standolyn Robertson, the president of the National Association of Professional Organizers. "If things look like they're in disarray, people will make the assumption that you're in disarray as well." While most workers veer towards messiness, NAPO says that some 70% of them are judgmental towards their cluttered colleagues. Thee without sin, cast the first stapler.

Some researchers, however, dispute the benefits of a spotless workplace. When Herman Miller (MLHR), an office furniture supplier, conducted an observational study of workplace organizational habits, they found that "filers" actually stored more useless information than their unkempt counterparts. The company identified a group of "work masters," or efficient employees, and reported that those staffers were more inclined towards piling than filing.

"When people place things on their desks, they're encoding information in the spatial connections and layers," says David Kirsh, a professor of cognitive science at UCSD. Kirsh, who studies workers in their natural settings, says many workers prefer to use a two dimensional surface. "If you disrupt that and force them to stack or file, you lose information."

So what's the verdict on clean desks? It depends on who you ask. Office staffing agency Ajilon reports that just 11% of workers earning over $75,000 a year call themselves neat freaks, compared to 66% of those making $35,000 or less. But according to an IDC report, an enterprise with 1000 workers wastes $2.5 million a year due to the inability to locate and retrieve information.

David Freedman, an self-appointed "mess analyst" and author, says the concept of organization is context-bound. "If you try to force someone out of their comfort zone, they'll be less productive," he says. "People do better when they're in their natural state - neat or messy."

For Audi's De Nysschen, that happy place is a spotless one. "I've always liked keeping things tidy," he says. "Though my mother might beg to differ."