Many big European institutions are just as heavily leveraged as Lehman Brothers was before its demise. 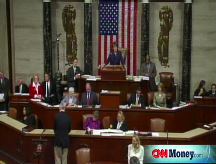 NEW YORK (Fortune) -- Leverage, the menace that helped bring down some of the biggest names on Wall Street, is now threatening the health of big banks across the Atlantic.

The credit crunch that led to the failure or forced sale of seven big U.S. financial firms last month is now wreaking its havoc on Europe. Four major financial institutions have been rescued in just the past week, and financial shares are in free fall as investors fret that more banks will need help.

The problems in Europe are worth watching because additional bank failures threaten to further undermine investor confidence at a time when the global economy is slowing, stocks are plummeting, and short-term credit markets are locked up. Economists fear that with the global financial system under severe stress, the economy is especially vulnerable to a shock that could deepen what's shaping up as a serious recession.

"The events of the past month have clearly increased the risk that the adjustment to the Anglo-Saxon household balance sheet is sharp and painful rather than prolonged and manageable," wrote Merrill Lynch economist Alex Patelis. "In a scenario of a violent U.S. consumption downturn, no economy globally would be spared, and a global recession ... would be unavoidable."

The problems in Europe show that the ills that brought down the likes of Lehman Brothers - heavy borrowing to support lending on now depreciating real estate assets - are now being felt in the rest of the world. Even the institutions that avoided the worst excesses of the subprime mortgage mess - such as Barclays (BCS), which recently took over some Lehman operations in the United States, and Deutsche Bank (DB) - have asset-to-equity ratios well in excess of the ones carried by commercial banks in the United States.

That means firms from ING (ING) of the Netherlands to UBS (UBS) in Switzerland have that much less of an equity cushion to absorb any losses on loans that go sour as the recession takes root. The fear that shareholders in those banks may be wiped out or seriously diluted in the next wave of rescues sent shares of big banks plunging Monday, with ING dropping 14%, UBS sliding 9%, and Deutsche Bank dropping 6%.

"Some of the major European banks have leverage ratios (often over 30, in some cases close to 50) that must, under current market conditions, be considered a disaster in waiting," Daniel Gros and Stefano Micossi of the Centre for European Policy Studies wrote last month.

Indeed, the big European banks' leverage ratios - reflecting the amount of debt they carry for each dollar of equity held by their shareowners - rival those of the big U.S. investment banks.

The U.S. investment banks ran aground because they borrowed heavily in short-term debt markets to buy assets that the market lost appetite for as real estate prices stopped rising. When the collapse of the subprime mortgage market in the U.S. caused bond investors to stop offering those cheap, short-term loans, the investment banks were forced to sell assets to bring in new capital and to seek more stable funding via the deposits attracted by commercial banks.

When 2008 started, there were five independent Wall Street firms: Goldman Sachs (GS, Fortune 500), Morgan Stanley (MS, Fortune 500), Merrill Lynch (MER, Fortune 500), Lehman Brothers, and Bear Stearns. Now, with the failure of Bear and Lehman, Merrill's agreement to sell itself to Bank of America (BAC, Fortune 500), and the decision by Goldman and Morgan to become commercial banks, there are none.

The European banks have big deposit bases, so the funding pressures they face won't be as acute as the ones that swept down Wall Street last month. Still, it's worth noting that the wave of selling that has slammed stock and bond markets since the demise of Lehman has spurred governments in the United States and Europe to take unusual measures to stem the flow of capital.

Authorities, fearing bank runs like the ones that brought down California's IndyMac and Seattle's Washington Mutual, have raised deposit insurance limits. Germany and Ireland have guaranteed the safety of bank deposits, and the bailout signed last week by President Bush boosts the FDIC limit to $250,000 from $100,000.

But it's not yet clear whether the deposit limits will do much to keep depositors from fleeing banks - or whether the result will be to strengthen weaker banks at the expense of the stronger ones.

The heavy use of leverage isn't the only link between Europe and Wall Street. Many European banks used deals with American firms such as insurer AIG - itself the recipient of an $85 billion emergency loan from the Fed last month - to reduce their regulatory capital requirements, Gros and Micossi note.

AIG said in its second-quarter report with regulators that $307 billion worth of its $441 billion credit default swap portfolio was written for the purpose of providing regulatory capital relief to European banks. By agreeing to guarantee loans on the banks' books, AIG allowed the banks to carry less capital against the loans - freeing the banks to lend that money elsewhere. AIG was a leading player in this business, but by no means was it the only one.

"The primary benefit of the credit default swap is its power as a new source of risk distribution," according to a note on the J.P. Morgan Treasury Services Web site. "It frees up regulatory capital, which facilitates additional business."

Now that the banks can see the value of their assets tumbling and capital is getting harder to raise, it's clear that the additional business was facilitated at substantial cost.