Motorcycle lovers gather at a weekend show of legendary bikes.

Paste this link into your favorite RSS desktop reader
See all CNNMoney.com RSS FEEDS (close)
By Owen Edwards
October 9, 2008: 9:10 AM ET
Making of a Legend
Entrepreneurs Brooke, 33, and Jared Zaugg, 36 , own Pop Creative, a marketing agency in San Francisco. The married couple created the Legend of the Motorcycle event in 2004. Their original inspiration was the 1998 "Art of the Motorcycle" exhibition at the Guggenheim Museum in New York City. The Zauggs modeled their event on the Pebble Beach Concours d'Elegance for classic cars, even hiring the chief judge from the Pebble Beach event to set cycle standards. Their weekend includes the auction, a Legends Dinner, and an invitation-only Ride of Legends.
Photos

Bidding on Legends
At the Legend of the Motorcycle Concours d'Elegance's auctions, buyers snapped up these classic motorcycles.
View photos
His motorbike spits flames 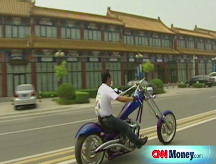 HALF MOON BAY, CALIF. (Fortune Small Business) -- It's midmorning of a cool May day on the California coast. Standing amid rolling fairways and tightly trimmed greens, entrepreneurs Jared and Brooke Zaugg are basking in the glory of their creation, not a golf tournament but a celebration of machinery. Today the Ocean Course links, wrapped around the Ritz-Carlton hotel at Half Moon Bay, are home to the third annual Legend of the Motorcycle Concours d'Elegance.

Undeterred by the overcast sky, fans stream across the 18th fairway to get a close look at hundreds of antique bikes that have been polished and primed by their owners, who include entrepreneurs, executives, and devil-be-damned bikers. By day's end more than 6,000 bike lovers, exhibitors, and collectors will show up, many arriving on their own vintage rides.

I've attended this event each of the past two years, and I fully intended to arrive in glory this year on my own classic - a 1975 Honda (HMC) 400f Supersport that I bought 33 years ago and hope to pass on to my children. I still ride it around San Francisco. Sadly, this year I couldn't get it started.

Some of the bikes are the last known survivors of limited-production lines, and they'll be judged in their own categories. This isn't just a beauty contest: One requirement of all bikes is that owners must start their machines for the judges. That's a challenge in the damp coastal air, especially for very old machines. But the distinct vibrato of so many different motorcycles, from refined street bikes to sleek Grand Prix racers, all growling for action, makes it clear that their glory days are not over - even if some need a little help.

Yoshi Kosaka, who owns a classic-motorcycle shop in Los Angeles called the Garage Co., brought a 1970 Honda 750cc Grand Prix racer that must be started by an electronically powered roller device that spins the rear wheel.

Then there are the purists, like Mike Kron, a German who restores and replicates bikes for collectors in Munich. He proudly stands beside his implausible-looking replica of an 1894 Hildebrand & Wolfmüller - one of the world's first production motorcycles - which Kron lovingly refers to as "a collection of wrong ideas."

Here's how Kron explains the bike's starting mechanism: First you open a petcock on the gas tank to allow fuel to flow into a small box mounted on the front of the frame. Next you open that box and ignite the fuel with a match.

"Sometimes the fire would run back up the fuel line into the tank, and many of the bikes blew up," Kron says, betraying no fear. He spent seven years building this bike from scratch, using original drawings found in a German museum, which may explain his confidence.

'One for every decade'

Motorcycle racers once competed in stadiums on banked board tracks. Vince Martinico, 53, owns one of that era's stars, a century-old Indian racer that sports a bit of rust and a serious dent in its gas tank. Martinico, an antiques dealer with several automobilia collections in Auburn, Calif., pumps furiously on the pedals to get his bike revving, until the ancient twin cylinders begin to purr. "It's still got the original spark plugs," he boasts. "I've found a spare pair, but I haven't needed them yet."

As noon approaches, some 50 judges stalk the rows of bikes, which have been separated into 16 classes, ranging from 1901-29 American bikes to the Off Road 1970-77 category.

Darryl Richman, 50, president of Crafty Fox Software, a small consulting firm in nearby Santa Cruz, is pinning his hopes on a pristine 1928 R52 BMW, one of his seven Beemers.

"I have one for every decade except the '30s and the '80s," he says proudly. Currently Richman is restoring a 1941 model R71. "Getting prewar parts is becoming more difficult," he says. "But you end up with a network of people who have what you need - different people for different eras."

Jamie Waters, 33, an investment manager from Stamford, Conn., stands beside five of his prime British Nortons, sexy bikes from a manufacturer with more than 100 years of history and a spotty reputation for reliability. So who's perfect? Waters keeps another 45 Nortons back at a 10,000-square-foot warehouse in Jersey City, N.J., that he shares with eight friends who are also collectors.

"My first love was cars," he says, "but I like to race vintage bikes, and I have a collecting bug."

I was also admiring one of Waters' more modern Nortons, a 1972 flat-track racer sporting No. 44 on its tank. The bike was built by Ron Wood, a West Coast bike builder and racer. As I inspected the fine craftsmanship, I noticed a gray-haired man approaching.

"Hello," he said to Waters. "I'm Ron, and I wanted to meet the person who owns my bike now." It turned out that Jamie Waters and Ron Wood had corresponded but never met. Their machine later won Best in Class for Norton competition motorcycles.

For me, that award represented a passing of the torch from one generation of collectors to another. And then I thought, if I can get my temperamental Honda Supersport started, I want my son to ride it down from San Francisco next year to attend the fourth annual Legend of the Motorcycle Concours.

Craftsmen of the Great Outdoors
To write a note to the editor about this article, click here.