How to jumpstart a new career

Lack of experience keeps many people from trying to switch to a different industry, but it can be done. Techies' know-how is particularly portable.

MBAs back away from Wall Street 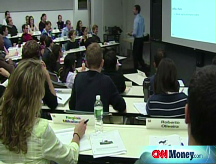 NEW YORK (Fortune) -- Dear Annie: All of my short professional life so far has been in an industry that I've realized is not for me. I'm currently the only IT guy in a small company, a job I took with the assurance that I would gradually be moved into more of a management position, but that has yet to happen. I'm sick of computers, but all my experience (including part-time jobs in college) is confined to this area. What is the best way to redo my resume and approach interviews in a completely different industry? I know of a number of other people my age (mid-to-late 20s) who are in the same situation. - Feeling Stuck

Dear Stuck: You may soon have plenty of company, as hordes of employees in shrinking or troubled industries start job-hunting (voluntarily or not) in the months ahead. Moreover, David Reimer, a vice president at outplacement giant DBM, isn't at all surprised that you and your twentysomething friends are already eyeing the exits.

"It's the same realization that used to hit people in their 40s, back when the model was, you picked a career and then stuck it out no matter how restless you were," Reimer notes. "Young people now are much more willing to admit when something isn't working out." The average employee now changes jobs 7 to 10 times in a career, with at least two or three of those moves being jumps to a completely different kind of business.

Overall, Reimer says, DBM's research says that 10 to 15% of job changers are choosing to enter a new field, but those figures vary dramatically by industry. "Right now in financial services, we're seeing about 40% of job changers looking to get into a different industry," Reimer says. "In IT, it's only about 9%, with a lot of folks changing jobs but few people leaving the field." That's probably because, although IT job growth is starting to slow, new opportunities are still out there. The AeA, IT's biggest trade association, announced last week that the U.S. high-tech industry added 78,300 new jobs between January and July of this year, a 1.3% increase over the same period in 2007.

You don't mention whether you've picked out which industry you'd rather be in. If not, that's the place to start. "You need to know exactly what you're looking for," says Reimer. (Richard Nelson Bolles' classic guide What Color Is Your Parachute?, $18.95 from Ten Speed Press, might help. A new 2009 Job Hunting in Hard Times Edition hits bookstores this month.) "While you're rethinking your resume, ask yourself when you've felt most satisfied. Pinpoint which job or task made your strengths come to the fore and was most enjoyable," Reimer says. "What kind of project was it? Did you work on it with a team or alone? What skills, besides technical skills, did you use?"

Once you've thought that out, Reimer suggests you find a knowledgeable advisor you can use as a sounding board. "It should be someone objective - maybe a coach or, for young people, even someone like a friend of a parent," he says. "The idea is to get some ideas by saying, 'Here's what I'm good at and enjoy doing. What does it suggest to you?'" At the same time, try to find out as much as you can about fields other than your own, by asking around among friends, alumni of your college, and relatives, as well as through social networking sites like LinkedIn that let you post questions for other members to answer.

And speaking of networking, it's even more essential for people looking to change industries than it is for the rest of us. "Because of the sheer volume of information about applicants that hiring managers have to look at, the quickest 'sort' - that is, the quickest way to screen out a lot of candidates - is by industry experience," says Reimer. "So if you haven't got any, a referral by a networking contact may be the only way you get a chance to meet an interviewer."

After you've decided what business you want to go into, get to know as many people working in it as you can. Join trade groups, go to conferences, participate in online chat rooms, ask friends for introductions to other friends. Don't be shy.

To get past your lack of experience when you do meet hiring managers in your new field, Reimer says, bear in mind that "your work experience is more than just a chronology of the jobs you've held. Tell what you have accomplished in each role. If you can state a problem, what action you took, and how it was resolved - for example, 'Renegotiated a contract with a major supplier, saved the company 15%' - you can go almost anywhere, because any company would want someone who can do that."

He adds that, as a techie, you are more marketable than you might think: "IT people, more than most, tend to have an analytical, problem-solving mindset. Describe a few examples of how you have made use of that and you should have no problem."

One further thought for restless IT folk: Take a look at a new 293-page book called Debugging Your Information Technology Career ($35 at http://www.elegantfixpress.com/). Author Janice Weinberg was a systems programmer at IBM and held marketing, sales management, and strategic planning jobs in GE's computer services business before starting her coaching firm, Career Solutions (http://www.janiceweinberg.com/). Her book describes "offshore-resistant" ways for IT types to apply their experience in fields other than computers. For example, says Weinberg, "a network security administrator could become a broker or underwriter of cyberliability insurance. Or a software engineer who supports financial applications could qualify for a higher-paying position selling financial software."

For each of the 20 alternative careers in the book, Weinberg includes useful details like what to emphasize in job interviews and what a typical workday is like. Notes Weinberg, "In a world dependent on computer technology, the idea of a 'computer job' has taken on a much broader meaning than it used to have." That's good news for you: no need to feel stuck.

Readers, what do you say? Have you ever made the leap to a job in a different industry where you had no previous experience? Any tips on how to do it right (or how not to)? Post your thoughts on the Ask Annie blog!