The new darlings of the art market are ancient artifacts. It's a wild, high-stakes game with a shady past. Playing it could make you rich - or get you arrested. 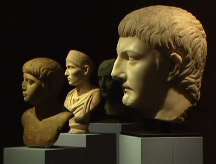 (Fortune Magazine) -- The antiquities trade has been making headlines, and they are weird ones: "Eulogy for the Euphronius Krater." (What in the world is a "krater"?) "Museum to Show Off Fake Egyptian Sculptures." (That's ridiculous, isn't it?) "Antiquities Dealer Gets Prison Time." (A nice old man with a pince-nez comes to mind, dragged off to the clink for some tragicomical offense, no doubt.)

Read beyond the headlines, though, and it becomes clear that something large is going on. The dealer convicted in 2002 is none other than Frederick Schultz, former head of a major professional group in the antiquities field and once an advisor to President Clinton on international arts policy. He was convicted of conspiring to smuggle newly found Egyptian relics to the U.S. by passing them off as tourist junk.

As for the actual fake sculptures, so overheated has this segment of the art market become that even counterfeits are now noteworthy. The faux Egypt pieces are works identified in the renowned Egyptian collection of the Brooklyn Museum.

What the museum had thought were important Coptic (Egyptian Christian) and pagan sculptures turned out, on close examination, to be sophisticated forgeries, probably from the 20th century. The museum has announced it will include them in an exhibition next year (rather than the more standard approach - hiding them in shame and disgrace).

And the Euphronios krater? Well, that's an 18-inch-tall wine-mixing vessel signed by famed Greek artist Euphronios - and a case that goes right to the heart of the matter. It used to reside in New York City's Metropolitan Museum of Art, which bought it in 1972.

Italian authorities, claiming that it had been illegally excavated and exported, demanded that the museum return it to Italy. (Although the krater is of Greek cultural origin, it was found in Italy, part of an ancient Etruscan collection of ancient Greek art.) This year the Met bowed to international pressure and sent the krater back home, inspiring eulogies from American admirers.

The return of the krater was a watershed: It told the world that an international consensus had finally and firmly taken hold on the rules for ownership of ancient artifacts. The consensus had been a long time coming - it grew out of a 1970 Unesco declaration seeking to impose some kind of order on the murky, often disputatious business of trading antiquities and authenticating their origin. And it had an extraordinary consequence: The market took off like Ben-Hur.

So just as New York was preparing to bid goodbye to the krater, the following headline appeared on Dec. 6, 2007, in the New York Times: "Tiny Lioness Commands Many Millions." A 5,000-year-old, 3 1/4-inch limestone figure from the Mesopotamian region of Elam - known as the Guennol lioness - went to auction after almost 60 years on loan to the Brooklyn Museum. And if the presale estimate of $14 million to $18 million had people talking, the sale price of $57.2 million left them speechless.

Just six months before, Sotheby's had sold a three-foot first-century bronze statue called "Artemis and the Stag" - now on loan to the Met from an unnamed owner - for a then-staggering $28.6 million, a record-setting auction price for both antiquities and sculpture at the time. But the Guennol lioness, with her pristine provenance (or origin documentation) and record-annihilating pricetag, provided proof that a "new" antiquities industry had emerged from the scandals of the recent past.

Michael Steinhardt is getting misty. "A little part of my life is built around ancient art," he says, something that sounds almost funny considering the contents of his Manhattan office: The two computer monitors on his desk do confirm that he is a hedge fund guru, but just about every other surface and vista in the large corner room feature Judaica and ancient art - his true love.

"If you see a wonderful archaic Greek marble object in a museum, it's not only that it's beautiful, but what comes to your mind is the fact that it's 2,600 or so years old, and it was done by a human being at that time who you have such a limited ability to grasp - and yet you have this enormous ability to grasp," Steinhardt says.

He's been collecting for more than 20 years, amassing what is probably one of the larger private American collections, and was moved to create it partly out of the impulse to do something more "ennobling" with his fortune than buy a "private jet or Picasso."

Ancient art presented a challenge: Antiquities "require more of yourself to be a good collector," says the autodidact. "You see an Andy Warhol - well, thank you very much. Maybe there's something to know and maybe there's a depth that totally escapes me, but I don't think you can collect fifth-century Greek material or collect Greek pots without understanding a good deal more."

Steinhardt conducts a walking tour of his office, pointing out a mockup of a Roman stela he's just bought depicting a Greek killing an Amazon, a scene he says touched him with its Holocaust echoes. But there's one story about his collection that he won't tell: the time U.S. customs agents entered his Manhattan home, confiscated a Sicilian phiale (that's a bowl) valued at more than $1 million, and sent it back to Italy, all at the request of that country's authorities.

The case made major headlines, particularly because it underscored the U.S. government's willingness to enforce a foreign government's cultural patrimony - i.e., national heritage - laws in the antiquities arena. Steinhardt is right: You do have to know a good deal to be a successful antiquities collector, not just to spot value but to avoid being publicly embarrassed, accused of theft, or forced to bid farewell to an artifact you've acquired (and even the money you've spent on it).

That's because what ultimately catapulted antiquities from relative commercial obscurity to the art world's center stage was the codification of provenance and the rules of national ownership. This began with the Unesco declaration in 1970, formally called the Convention on the Means of Prohibiting and Preventing the Illicit Import, Export, and Transfer of Ownership and Cultural Property.

As one country after another has ratified the convention, it has become something like international law. And many governments have gone further, enacting measures that make any new finds within their borders property of the state. The upshot is this: No newly excavated antiquities will be hitting the market, so any piece with good papers - showing it came out of the ground before the convention was established in 1970 or was legally exported after that - automatically skyrockets in value.

But owning an antiquity isn't quite the straightforward affair that picking up the odd piece of Pop Art or animal in formaldehyde might be. Aside from the legal matters - finding a reputable dealer, confirming provenance, generally avoiding search and seizure - there are the more nuanced ethical questions. Many archaeologists say any antiquities trade, and particularly one with the recent astronomical prices, promotes looting and destroys archaeological context.

Museum curators, dealers, collectors, and even a few scholars take the opposite view, pointing out that the antiquities trade has existed since, well, antiquity. (And that eliminating it altogether would force those with unprovenanced artifacts or accidental finds to go underground, thereby - you guessed it - encouraging looting and destroying archaeological context.)