Bonds drift ahead of election 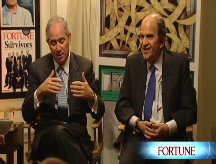 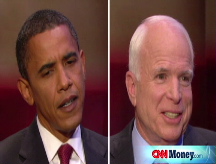 The government may need to finance about $1 trillion in programs that need funding by the end of the year, which will bring a great deal more supply to the market. Last week, the Treasury auctioned $34 billion of 2-year notes, $24 billion of 5-year bonds, and $27 billion in 4-week bills.

The government said Monday afternoon that it anticipates borrowing $550 billion in the fourth quarter and $368 billion in the first quarter of 2009 as it looks to fund a massive bailout package.

But demand for Treasurys remains, even with expanding supply, as the economic outlook remains murky. A survey of top economists from the National Association of Business Economistsshows they believe the economy has slipped into a recession, and that the economic downturn will last through 2009. Accordingly, investors predict that the Federal Reserve will cut rates to an unprecedented 0.5% after its Dec. 16 meeting in an effort to boost economic activity.

Looking forward: The bond market was mostly quiet Monday as investors awaited results from the U.S. presidential election Tuesday and the monthly employment data due at the end of the week, said William Larkin, portfolio manager at Cabot Money Management.

While there were several dour economic reports released Monday, Larkin said the data were not surprising, which was partly why the bond market was hesitating.

And investors are also keenly awaiting a clear decisive end to the race for the White House.

"The market wants the uncertainty of its next president behind it," said Larkin. "If it gets hung up [at all], then it will be good for Treasurys and bad for stocks. Being hung out in limbo is going to cause some problems."

Investors typically move funds into government bonds as a perceived safe haven from volatility and instability.

The government is slated to release its October employment data Friday, which "feeds into consumer confidence, it really impacts consumer spending," said Larkin. A consensus estimate of economists polled by Briefing.com expect the unemployment rate to increase to 6.3% from 6.1% in the prior month.

Treasurys were higher Friday despite a rise in stock prices, as a slew of economic indicators showed even more weakness in an economy likely already mired in a recession.

Lending rates continued to fall Monday, as the Fed and central banks around the world attempt to boost liquidity among financial institutions.

The overnight Libor rate fell for the sixth-straight day to 0.39% from 0.41% on Friday, according to Dow Jones. It was overnight Libor's lowest level since the British Bankers' Association began calculating the rate in 1997.

Libor, the London Interbank Offered Rate, is a daily average of what 16 different banks charge other banks to lend money in the U.K.

Lending rates have been trending downward for the past several weeks. Just a month ago, 3-month Libor was over 4%, and the overnight rate was at an all-time high of 6.88%. Lower rates are a major boost for the strangled credit market, as more than $350 trillion in assets are tied to Libor.

Many economists believe falling rates are a result of a number of government programs aimed at easing funding concerns for banks and encouraging lending between financial institutions. These include measures such as lowering interest rates, injecting capital into banks and providing insurance on all non-interest bearing accounts.

Larkin said that the improvements in the lending rates were due to coordinated actions by central banks around the world. "Globally, central banks are cutting rates and there is an incredible amount of liquidity in the markets," he said, which has helped lower the Libor rates.

However, home mortgage rates, which are calculated using Libor, have been slower to decline and that continues to be a worry. "The big key going forward," said Larkin, will be "how does the Fed and the Treasury get the mortgage rates down."

As rates fell, two key indicators of risk sentiment showed that confidence in the market was improving.

Another indicator, the "TED spread," fell to 2.42 percentage points from 2.65 points on Friday. The TED spread measures the difference between the 3-month Libor and the 3-month Treasury bill, and is a key indicator of risk. The higher the spread, the less willing investors are to take risks.