Trying to catch the wind

Developers and turbine makers are scrambling to feed growing demand for power. 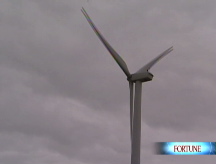 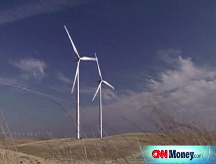 (Fortune Magazine) -- About 60 miles north of San Francisco, the strip malls of Solano County give way to gently rolling hills where, as far as the eye can see, wind turbines sprout from the golden bluffs overlooking the Sacramento delta. Construction on Solano's newest turbine farm, Shiloh II, began this summer, part of a wind rush that has transformed the U.S. into the world's biggest wind market.

An estimated 8,000 megawatts of new capacity will be installed in the U.S. in 2008. That's enough electricity for nearly three million homes, and it represents a jump of 50% on the heels of last year's 45% increase. Among the forces driving growth: Congress's extension last month of a key tax credit and state mandates requiring utilities to tap renewable energy. "Utilities are going to take wind and run with it," Jeff Immelt, CEO of General Electric (GE, Fortune 500), the nation's biggest turbine maker, said recently. Global growth remains strong as well, with generation capacity continuing to increase at a 30% annual clip, although the credit crunch could slow expansion in the near future.

And it is a truly global business. Take a closer look, for instance, at Shiloh II.

The 150-megawatt project is being developed by enXco, the U.S. subsidiary of French energy giant EDF. The turbines that lie scattered around the construction site like giant Tinkertoys were made by Germany's REpower, itself acquired last year by Suzlon, an Indian wind-machine manufacturer that has relocated its global headquarters - to Denmark. "If you want to invest in wind, you're generally looking at overseas stock markets," says Ethan Zindler, head of North American research for New Energy Finance, a London-based research firm.

Moreover, while wind power has attracted some big names like GE and FPL Group (FPL, Fortune 500), the business plays only a minor role in their portfolios. Most pure wind outfits are far smaller and can be very volatile - and they tend to sport high price/earnings ratios, despite recent stock drops. With that caution in mind, and after talking to industry insiders and poring over financial reports, we came up with the four intriguing wind stocks discussed below. They are speculative bets, so intrepid investors should check them out carefully before putting any money at risk.

Wind stocks generally come in two varieties: equipment makers, which produce turbines and other hardware, and developers, which build power plants. Among developers, Iberdrola Renewables (IBR.MC), traded on the Madrid stock exchange, is the name to know. Spun out from the big Spanish power company Iberdrola last year, it is the world's largest wind-power developer, with sales of $1.4 billion in 2007, expected to rise to $2.8 billion this year.

The U.S. is Iberdrola's largest market outside Spain and will drive its expansion. Terry Hudgens, CEO of Iberdrola Renewables' North American operations, says the company plans to install 1,000 megawatts of new wind capacity a year in the U.S. "We secured this pipeline years ago, before these other companies decided to get into the U.S.," he says. The company is growing fast: In its most recent quarter Iberdrola saw sales of $698 million, up nearly 200% from the same quarter a year ago, while pretax profit rose nearly 600%, to $153 million. And the stock has a highfliers' P/E of nearly 40.

Iberdrola buys turbines from Suzlon, Mitsubishi, Siemens, Vestas, and GE. But its biggest supplier is Spanish company Gamesa (GAM.MC). In fact, Iberdrola just placed the largest turbine order on record with Gamesa, which is now the No. 2 turbine maker in the world. Gamesa's P/E of 18 is double the industry average, but its profits are expected to grow 30% this year.

The No. 1 windmill maker, with 23% of the world market, is Vestas (VWS.CO), traded on the Copenhagen exchange. It saw revenues grow 26% in 2007, to $7.2 billion, and it has a market cap of nearly $11 billion. The appeal of the stock for wind investors, says London-based Citigroup analyst Mark Fielding, is that "its market-leading positions make it a proxy for the overall strength of the market."

Finally, an upstart to watch is Clipper Windpower (CWP), which is based in California but trades in London. Customers for its 2.5-megawatt Liberty turbine include FPL, BP (BP) - which is developing the world's largest wind farm with the company - and Queen Elizabeth II, who bought the prototype of a ten-megawatt offshore windmill. Its shares dropped 78% this year over quality issues, but those glitches have been fixed, says CEO Doug Pertz. Clipper lost money in 2007 and will do so again in 2008. Still, analysts and industry insiders say that its innovative technology and the strong demand for turbines could make it a winner in the long run.