Everyone's worried that hedge fund investors will pull their money out en masse and ignite another market selloff. That's not how it looks to one insider.

By Barton Biggs, managing director of Traxis Partners
November 11, 2008: 6:28 AM ET
ROAD TO RESCUE
The next Paulson 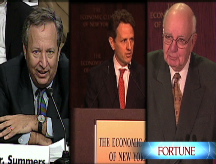 (Fortune Magazine) -- Bear in mind two caveats as you peruse these comments. First, I run a hedge fund, so I am hardly an unbiased observer. Second, nobody, and I mean nobody, really knows what hedge fund liquidity is or what redemptions are or will be.

What follows are the enlightened - I hope - opinions of an aged participant about the unknown. I am, however, investing my money and others' on these opinions.

During the 40% bear market of 2000-2003, hedge funds and their fund of funds as a group posted positive returns each year. This exemplary performance spurred a huge boom, and the industry by the end of last year had more than 7,000 funds, managing an estimated $1.9 trillion worldwide. Big money and greed attracted less qualified, inexperienced, and trading-oriented participants.

In this year's killer bear market, hedge funds, with precious few exceptions, have suffered big losses, proving once again the truism that there is no asset class too much money can't spoil. Now the worry is that a tsunami of redemptions from disillusioned investors will force a deluge of hedge fund selling that will depress markets further.

I don't see that happening. For one thing, the panic has abated, and since most funds have losses to make up before they can begin to earn their performance fee again, investors who redeem now are forgoing a free ride. (Of course, they still have to pay the fixed fee.)

Another reason is that so-called long-only managers (mutual funds, investment counselors, traditional portfolios) have done even worse this year. So where are the redeemers going to put their money?

Most of the hedge fund money is in the big multistrategy funds run by the best and the brightest, and I suspect that institutional investors will be loath to abandon them. However, several thousand smaller hedge funds will go out of business, because of either poor performance or lack of scale.

There is no question that a lot of money is coming out of the hedge fund space. Let's look at the $1.9 trillion. Losses have probably reduced it by 25%, to $1.4 trillion. Based on what I see and hear, $350 billion to $420 billion will be withdrawn by the middle of next year. Probably about $150 billion has already gone.

That means that there is about $250 billion to go (again, I am talking worldwide). That's not a huge amount, but what the bears are terribly worried about is that presumably this money is leveraged, and so to raise the cash, hedge funds will have to sell two to three times that much.

In fact, at least one huge fund has been liquidating leveraged positions. But I don't think that's the start of a wave. First, the prime brokers for the industry report that the hedge fund industry's net long position is now around 20% of their equity, an all-time low.

Hedge funds have heard the redemption footsteps: They have already sold down their long portfolios and tremendously reduced their gross book and leverage. It is a fact that hedge fund margin debt has been declining since July 2007, and prime brokers report massive hedge fund cash holdings.

In every bear market I have seen, the doomsayers concoct a statistical argument that the glory days for stocks are over, because a flood of selling by brutalized investors is inevitable, and the buyers have no money. This case always seems most compelling close to the end of the declines and is always marked by a wave of media pronouncements. Remember Business Week's "The Death of Equities" cover in 1980? Recent covers from Business Week and The Economist have had similarly dire alarms.

Investors are licking their wounds. The peak-to-trough decline in the Dow Jones industrial average was 42.3%, the second worst since the Depression. The angle of descent has never been matched, and volatility as measured by the VIX index is at record levels. The Dow is 32% below its 200-day moving average, the widest spread since November 1937.

The bottom of a bear market by definition has to be the point of maximum bearishness, and I think we're there. For the market to go up, the news doesn't have to be good. It just has to be less bad than what has already been discounted.

Why it's finally time to buy stocks

Meet the HENRYs: Their American dream is on hold