Chinese brands got a boost from the Olympics, but it didn't last long. 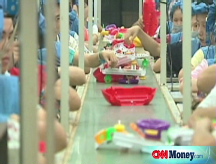 A new Fortune/Interbrand survey measuring global perceptions of Chinese brands, launched on Fortune.com two weeks after the 2008 Beijing Olympic Games ended, showed an uptick in opinions of Chinese goods - at first. Some 5% of those who responded to the survey immediately after the games said the label "made in China" actually helped brands, and 36% initially said "made in China" neither hurt nor helped Chinese brands. (In 2007 only 3% had a positive association with "made in China," and 30% of respondents were neutral on the matter.)

But the halo effect of the games soon faded. After the revelation in mid-September that milk from several Chinese dairies contained melamine, a chemical used in plastics, opinion of Chinese brands reverted to their traditional levels: Two-thirds of respondents overall said the "made in China" label hurts Chinese brands, exactly the same outcome as the prior year.

For Chinese companies seeking to become global brands, a la Japan's Sony (SNE) or Korea's Samsung, such findings are disheartening. Corporations aspiring to the global stage can do much to bolster their image - adopting their own policies of openness and quality control, for example - but retooling broad perceptions of Chinese society also will require work on the part of the Chinese government, Chajet notes.

Many analysts and critics have questioned the regulatory prowess of the ruling Communist Party in the wake of the milk crisis. Despite a year-long effort to improve food and drug safety, more than twenty dairies operating in China produced baby formula that contained traces of melamine. According to news reports, government officials acknowledged that some offenders had not been subject to mandatory inspections.

By all accounts, party leaders understand that stronger regulation of industry is key to gaining the trust of global consumers, but implementing the policies and rules - and instilling in government a spirit of accountability - will be a huge challenge, experts say.

In the meantime what's an ambitious Chinese brand to do? At least one Chinese company became an overnight global brand through acquisition: Lenovo in 2005 catapulted onto the world stage when it acquired IBM's personal computer business. Interbrand's Chajet suggests Chinese companies trying to go global might do well to follow the model of Taiwanese companies such as ASUS, a maker of motherboards and other computer components, and PC-maker Acer.

It wasn't that long ago that "made in Taiwan" had the same connotation as "made in China" does today: cheap and low-quality. ASUS and Acer established footholds in emerging markets in Asia and Eastern Europe before plunging into more competitive markets in the U.S. and western Europe.

Of course, neither ASUS nor Acer has quite the cache of a Sony, Samsung or even LG, another Korean brand that frequently is associated with innovation. (It was one of the first appliance makers to launch an Internet-connected refrigerator, for example.) But most Chinese companies need not aspire to serve high-end Western consumers, says Hubert Hsu, a senior partner in Boston Consulting Group's Hong Kong office. Hsu says the Chinese companies that excel at producing low-cost products should embrace that advantage as part of any globalization strategy. Most consumers in emerging markets, for example, are not likely customers of the LG Prada phone or the Sony Bravia television.

And a global recession might fuel demand for low-end products even in mature markets. "We think the lower end of the market will continue to be very large and very attractive," Hsu says. "And it will take very different requirements to win in that space than in the high-end space."

Two-thirds of respondents to the Fortune/Interbrand study said "cheap" is an attribute they'd use to describe products made in China. For Chinese brands that find global success by serving the low end of the market that may not be such a bad thing, after all.